The Belle of New York 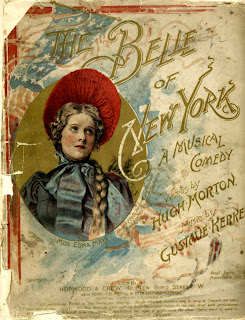 I recently posted about Lowry attending a performance in Torquay in 1933 of this musical comedy on Gutted Arcades of the Past.

Below is a synopsis of the The Belle of New York:


Act 1
Ichabod Bronson is a wealthy hypocrite who preaches virtue to the young, so as to leave more scope for dissipation among the old. His son, Harry, is a feather-brained spendthrift, engaged to Cora Angelique, the Queen of Comic Opera. After a riotous stag night, Harry ends up with Fifi, the daughter of Fricot the confectioner. Ichabod discovers them together and disinherits Harry. Deserted by all but Fifi, Harry wanders into Chinatown in New York, where his fickle fancy is taken by a young Salvation Army woman, Violet Gray. She finds her vocation difficult because, though she tries to persuade men to follow her blameless ways, they persist in following her blameless figure. Ichabod discovers that Violet is the daughter of an old friend and announces his intention to leave his huge fortune to her.


Act 2
Harry has taken a job as a salesman in a candy store on Broadway. Violet and her Salvationist colleagues enter the shop, all decked out in short skirts. She knows that Harry is engaged to Cora and wants the couple to be happy. She tells Harry that she is going to change Ichabod's mind about leaving his money to her. On the beach at Narragansett Casino, she sings a risqué French song, scandalising an audience including Ichabod. The effort of performing the song causes her to faint. Matters are further complicated by the persistent attempts of a German lunatic to kill people, particularly Ichabod, and by the quarrels of Portuguese twins, who keep trying to fight duels with one another. Harry has indeed been much influenced by Violet's virtue and has fallen for her. He explains to his father why Violet has behaved so uncharacteristically, and Ichabod forgives him his earlier sins on condition that he marries Violet, which he is now happy to do.

In a letter to Jan Gabrial in the Summer of 1933, Lowry said he went to see the musical comedy because of the title - likening Jan to the belle of New York - where she was from. However, the plot had funny coincidental undertones to Lowry's life a the time - the idea mooted by Lowry later that his father was a hypocrite - dying of cirrhosis of the liver (untrue); Arthur Lowry may have thought Malc a spendthrift having just smashed up his car while staying in Torquay, the idea of disinheritance because of his behaviour haunted Lowry, a month before he had "hidden" Jan from his father when his father paid him a visit in Portmeirion though the happening end of the musical comedy didn't transpire for Lowry and Jan.

Here is a selection of songs from the musical comedy:

Posted by Keeping Soul Alive at 08:12 No comments: 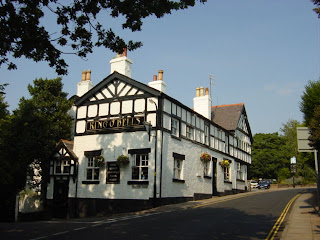 I have just posted about Lowry's connection to the pub on Gutted Arcades of the Past. In doing research for the post I came across a 1936 advert:

This hotel has proved a port of call and pleasant resting place for such national characters as the poets SHELLEY and KEATS, also the artist TURNER when painting his pictures of sunsets on the River Dee. It was the source for that famous song "SIMON THE CELLARER", which was composed here.


The advert made me smile as it could have been written by Malc at his mischievous best with his penchant for tall stories - perhaps he was the source for the unknowing landlord?

The song  by John Liptrot Hatton, 'Simon the Cellarer' was not written in the pub but more than likely it was about the former Ring O' Bells in Bidston. Though I did think you could add it to the Malc playlist for the next Lowry Lounge!


Here are the words:

Dame Margery sits in her own still-room,
And a matron sage is she,
From thence oft at Curfew is wafted a fume;
She says it is Rosemary,
She says it is Rosemary.
But there's a small curboard behind the back stair,
And the maids say they often see Margery there -
Now Margery says that she grows very old,
And must take a something to keep out the cold!

The references to Malmsey would resonate with Lowry fans - who would recall how Malc stated that he was named Clarence after Shakespeare's duke who died head-down in a malmsey butt; Rosemary - the name of the elephant in the short story 'Elephant and Colosseum' and of course Margery - his second wife.

Here is the song performed by Peter Dawson:

Posted by Keeping Soul Alive at 07:52 No comments:

Gutted Arcades of The Past Update

I may have been neglecting Malc on my 19th Hole Blog but I have been busy over on my Gutted Arcades of The Past blog unravelling Malc's early work and life.

I have passed the 200 posts mark on Gutted Arcades of The Past with plenty more to come. Recent posts have included a breakdown of Malc's references to his time in France in 1926 and 1933/34 plus details of those trips; a further breakdown of his 1931 trip to Norway and the beginnings of my research into the many literary allusions in Ultramarine.


Posted by Keeping Soul Alive at 05:40 No comments:

Email ThisBlogThis!Share to TwitterShare to FacebookShare to Pinterest
Labels: Gutted Arcades of the Past
Newer Posts Older Posts Home
Subscribe to: Posts (Atom)