At The Egremont Ferry Pub 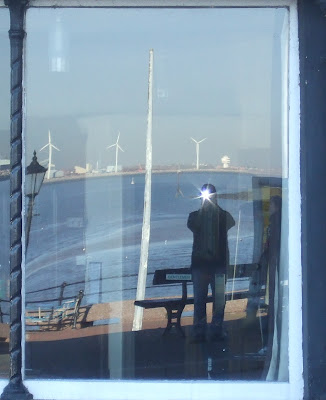 I have only got to step out of my front door to be in the footsteps of Malc as I live in the place of his birth - New Brighton.

On a recent walk, I ended up outside the Egremont Ferry pub - a location which features in Malc's first novel Ultramarine.

Sitting in the friendless saloon, semicircular, and bare of furniture, on a hard striped bench, he smokes a pipe in silence.... Ultramarine 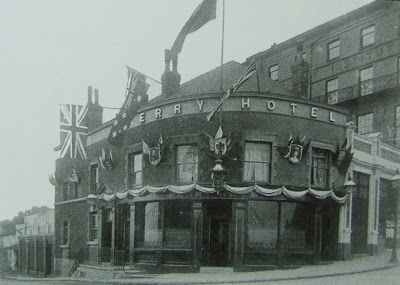 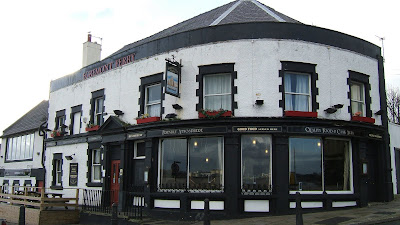 Posted by Keeping Soul Alive at 05:24 No comments: 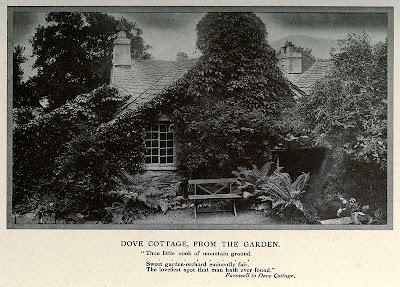 In September 2010, I visited the Lakes for a short break. During the trip, I took the opportunity to explore some of the places Malcolm Lowry visited on his last holiday before his death in 1957. I intended to eventually write up my visit on my Malcolm Lowry blog. 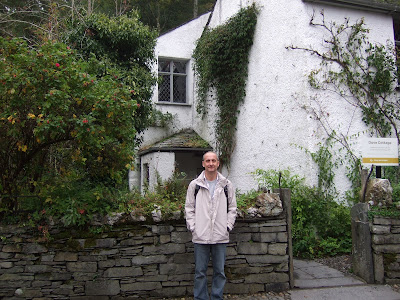 During the break, I went to Dove Cottage in Grasmere now a museum dedicated to William Wordsworth. Lowry had visited the cottage as part of his holiday. During our tour of the cottage, I discovered that Thomas De Quincey had visited Wordsworth there and subsequently lived there and kept the property for 25 years. This fascinated me and I thought it ironic that so much emphasis is put on Wordsworth short tenure! This also struck Lowry as I discovered when I read one of his letters when I got home: 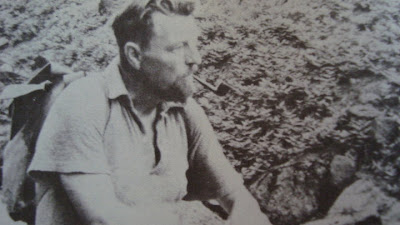 I managed to obtain a 1927 copy of the Diary with an introduction and notes by Horace A. Eaton. What is fascinating about this edition is that it contains both a facsimile copy of De Quincey’s handwritten diary and a transcription of the diary.

The diary's entries gave me greater stimulus to research De Quincey's time in Everton. My reading of the diary coincided with being invited to participate in Cathy Butterworth's Sketches From Britain project. The visit to Dove Cottage was also the catalyst I needed to explore De Quincey's time in Liverpool sparked by David Jacques's film and book Por Convención Ferrer (2008).

As a consequence of the above, I have set up a new blog called De Quincey in Everton. My intention is to explore De Quincey's time in Everton in the same manner as I have explored Malc's life and work on the 19th Hole. Lowry fans don't worry - my priority lies with my Lowry research and musings!
Posted by Keeping Soul Alive at 03:46 No comments:

Email ThisBlogThis!Share to TwitterShare to FacebookShare to Pinterest
Labels: De Quincey, Malc in The Lakes, Under The Volcano

Charles Jupiter Hamilton — Under the Volcano 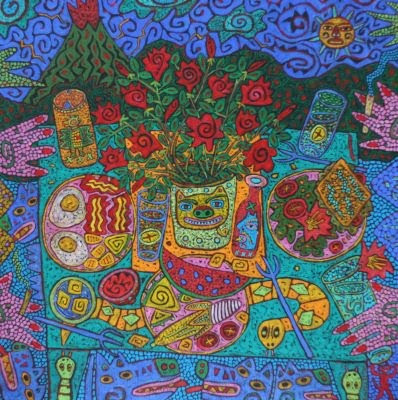 Charles Jupiter Hamilton creates highly expressive wood relief paintings, sculpture and prints that combine the vitality of contemporary art with rich and resonant figurative imagery. Known for his vivid colors, elaborate mosaic patterns and studied primitivism, Hamilton makes captivating images laced with unbridled enthusiasm that might seem almost child-like were it not for his sophisticated techniques and satirical humor. His thoughts are suspended in a teeming spectacle that seduces the eye, encouraging the viewer to search past the work's surface, beyond the intricacy of arabesque designs, to reveal images within images - mythological beasts, whimsical animals and animated figures.

The use of wood is central to his work. The wood is shaped and etched free-hand with a carpenter's router and then brightly painted in bursts of hot and cold colors. To use Charles Jupiter Hamilton's own words, his use of color, "goes immediately for the nervous system."

The work of Charles Hamilton has received warm recognition beyond West Virginia's border and has been exhibited in galleries and museums in Boston, Atlanta, Chicago, Miami, Tampa and Washington,D.C. His works have won numerous purchase prizes and awards and are held in several museum and corporate collections including Sunrise Museum in Charleston, WV; Susquehanna Fine Art Museum in Harrisburg, PA; Thompson Cigar, Tampa FL; and Fidelity Investments, Boston, MA.

Charles Jupiter Hamilton was born in Princeton, New Jersey in 1948 and received his art training at the University of North Carolina at Chapel Hill. His inspiration comes from American pop-culture cartoons and billboard advertising. He has also been influenced by traditional Appalachian wood carvings and renderings of gargoyles from European cathedrals. Callen McJunkin Gallery
Posted by Keeping Soul Alive at 04:55 No comments:

Email ThisBlogThis!Share to TwitterShare to FacebookShare to Pinterest
Labels: Art Inspired By Lowry, Under The Volcano

Opening Titles of John Huston's Under The Volcano Movie 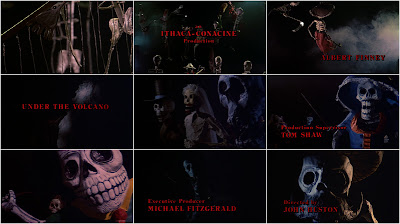 Continuing with posts relating to The Day of The Dead - one of the best things about the Under The Volcano movie are the opening credits directed by actor/filmmaker Danny Huston, John Huston’s son.

From the dvd insert:

Posted by Keeping Soul Alive at 04:44 No comments:

Email ThisBlogThis!Share to TwitterShare to FacebookShare to Pinterest
Labels: Day Of The Dead, Under The Volcano Movie 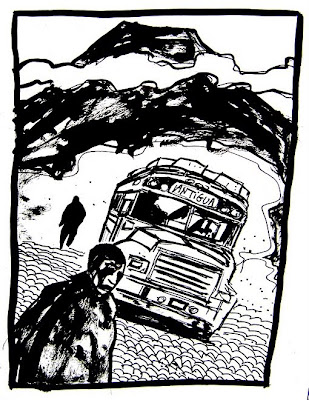 Yves Budin is a Belgian illustrator.

Check out his work here 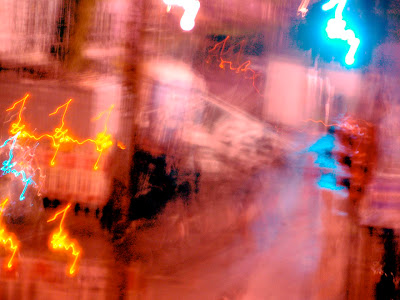 “Have you not passed through the river? In the name of God be dead.”
– Malcolm Lowry, Under the Volcano

Checkout more of Peter's work at ARTDOXA
Posted by Keeping Soul Alive at 03:55 No comments: 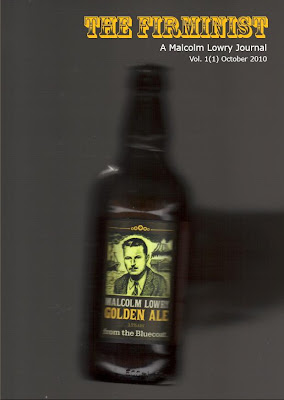 Last Friday's inaugural Lowry Lounge featured the launch of the Firminist magazine. The magazine is published by the University of Bradford in association with The Bluecoat, Liverpool.

Mischievous world over which merely more subtle lunatics exerted almost supreme hegemony, where neurotic behaviour was the rule, and there was nothing but hypocrisy to answer the flames of evil, which might be the flames of judgement, which were already scorching nearer and nearer…

The above words are the thoughts of William Plantagenet, the protagonist of Malcolm Lowry’s story Lunar Caustic. Lowry began the tale in 1935 after he was interned in Bellevue Hospital, New York following a bout of alcoholic excess – an occurrence he described wryly as a ‘deliberate pilgrimage’. The book was finally published as a novella in the UK in 1963 after, typically, many revisions.

Lowry had a gift for the prophetic. His most famous character Geoffrey Firmin – ‘the Consul’ in his most famous novel, Under the Volcano – stood for the perpetual failure of human beings to achieve wholeness because of desire, fate, weakness and bad luck. Beneath the dense language and layers of symbolism and mysticism in Lowry’s work one can find a profound if unpartisan political message. Plantagenet’s words ring out as a haunting description of our current social, political and environmental malaise.

But ultimately Lowry asked us to accept the fragmentary nature of humankind as somehow ‘normal’, often expressing this through humour. We all experience our own ‘tooloose-Lowrytrek’, but moments of redemptive joy intermittently break out. Lowry left only a small, though vivid, collection of works (stories, novels, poems, songs), but fortunately also a large collection of brilliant letters, which, still echoing out across time and space, remain a source of inspiration and wonder for writers and artists.

The Firminist is an occasional journal devoted to the work of Malcolm Lowry containing essays, reports, graphics – and crosswords. It is of course not intended to supplant the considerable body of research on Lowry already conducted or underway (and we note here especially the work of the Canadian group of Lowry scholars who ran, from 1984 to 2002, The Malcolm Lowry Newsletter/Malcolm Lowry Review), but will, we hope, make a modest contribution to the promotion of Lowry’s work – especially in the UK, the place of his birth and death.

'Tooloose'on the Wirral: A Report of The Voyage Never Ends
The Firminists
Mark Goodall, the leader of the Firminists reveals what a group of Lowry acolytes got up to one Autumnal day last October to celebrate the spirit of Malc on Merseyside.

Drawn Out: The Appearance of Malcolm Lowry in Contemporary Art
Bryan Biggs
Bryan catalogues the art exhibition, which he curated, the centre-piece of last year's Lowry Centenary Festival at the Bluecoat, Liverpool.

Bollocky Bill and Seraphina: Music in Malcolm Lowry's Ultramarine
Colin Dilnot
A snapshot of my on-going research into Lowry's use of music.

The Consul in the Pharmacy: Orphaned Writing, Alcohol, and the Pharmakon-Structure in Under The Volcano
Helen Tookey
Helen's insightful essay throws up some intriguing thoughts on Lowry's "life and death struggle" with language.

In the Footsteps of Lowry in Oaxaca
Alberto Rebello
Alberto takes on a tour of Oaxaca to discover the place where Lowry's demons caught up with him.