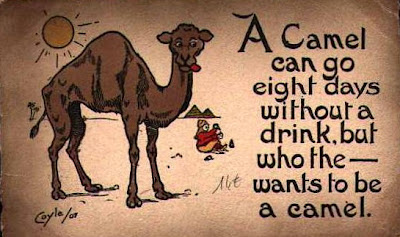 The second post inspired by Malc's monicker "Camel" which he used to sign off his article in the Leys Fortnightly.

Let's kick off another batch of Camel Walk tracks:


Posted by Keeping Soul Alive at 04:08 No comments:

Here is another post inspired by my recent e-conversations with Annick Drösdal-Levillain. We had been discussing Lowry's pseudonym "Camel" for some of his writings for the Leys Fortnightly which he adapted from his initials C.M.L.. Our exchange started me thinking of the old dance called the "Camel Walk". Perhaps the impending annual "irreverence" called the Lowry Lounge in October also got me in the spirit!

I had always thought that the Camel Walk was a 60's dance concept but I discovered after looking through You Tube that the dance had its origins back in the 1910's or earlier:

The Camel Walk was a ragtime animal dance, came originally from Vaudeville shows. The Camel Walk was mainly done by college students and "flappers" during the Jazz age in the 1910's and 20's with the public as a social dance. It was basically done with a Staright Up (Posture) but otherwise was walking 1920's fox-trot from start to end while dragging your steps slightly, done to slow music and in a zigzag direction or rotary direction. The Camel Walk drew alot of displeasure among many mainly because the Girls woul rest their heads on the leaders shoulder while dancing which many frowned upon as vulgar dancing. Occasionally the dance was varied with Fox-Trot steps by those who disliked anything quite so extreme.

So let's kick off with the University Six - could Malc have heard this and been partly inspired to adopt the monicker Camel - who knows!

Then we have a demonstration of the dance by Al & Leon

Let's embark on a tour of the later versions: 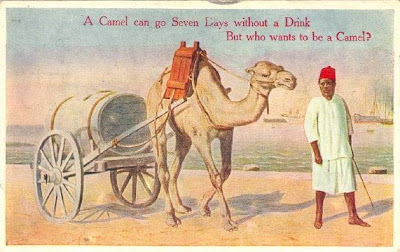 Posted by Keeping Soul Alive at 03:43 No comments:

Radical Wirral-born writer Malcolm Lowry, author of Under the Volcano, is remembered in this annual event: a psychogeographical walk round central Liverpool in Lowry’s footsteps, led by Colin Dilnot. The celebration continues at the Bluecoat with the launch of The Firminist No 2, an occasional journal of all things Lowry, plus talks, music, films and refreshments.

Meet at the Bluecoat.
Posted by Keeping Soul Alive at 09:28 No comments:

The Last Voyage of the S.S. Ile de France 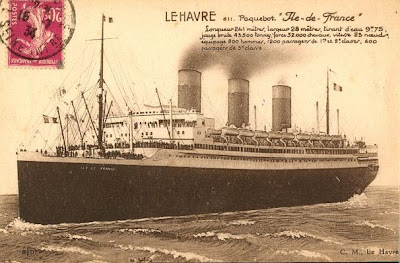 S.S. Ile de France was the ship that Malc's first wife Jan Gabrial sailed back to America on in 1934 and features in Malc's short story 'In Le Havre'.

I was recently exchanging mails with my fellow Lowryan scholar Annick Drösdal- Levillain which included the topic of coincidence. Annick wrote:

I recently salvaged a framed photograph of a ship my mother was about to throw away in her cleaning up frenzy. Now this photograph was taken by a fellow swimmer of my grandfather's and it happens to be the L'île de France, in Le Havre, in 1950. I kept it, thinking that it looked like the ships Lowry must have sailed, that was all. And now I fell upon it in your postcards... I was then puzzled to see that on your picture the ship has three funnels whereas on mine it has two. Wikipedia came to the rescue (the ship was launched in June 1927...modernised in 1947 after having served for troop transports during the war).The dates surrounding this ship are striking. 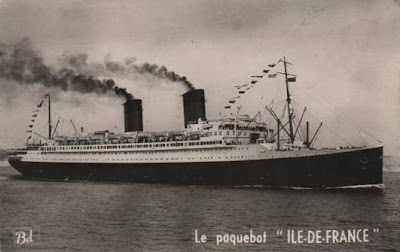 What makes Annick and me smile is how these little coincidences just continue to creep in while studying Lowry! Ile de France was launched as Lowry himself is launching into the world aboard Pyrrhus to the Far East and 1947 for the publication of Under The Volcano.

Malc was conscious of the fate of ships that he wrote about so that we shouldn't be surprised at the fate of the S.S. Ile de France which was unusual to say the least:

The ship used in the film (Last Voyage 1960) was the legendary French luxury liner SS Ile de France, which had been in service from 1927 until 1959, when it was sold to a Japanese scrapyard. Her former owners initially attempted to block Stone's rental of the ship (for $1.5 million), but withdrew their opposition when MGM agreed not to identify the vessel by its original name when publicizing the film.

The ship was towed to shallow waters, where jets of water shot onto the ship from fireboats flooded forward compartments and made it appear she was sinking by the bow. Her forward funnel was sent crashing into the deckhouse and her Art Deco interiors were destroyed by explosives and/or flooded. Because there were too many poisonous jellyfish in the Sea of Japan, the final lifeboat scene was filmed in Santa Monica, California. In his autobiography Straight Shooting, Robert Stack recalled, "No special effects for Andy [Stone]; he actually planned to destroy a liner and photograph the process. Thus began a film called The Last Voyage, which . . . for yours truly very nearly lived up to its title." According to William H. Miller, American maritime historian, The French Line thereafter forbade any use of the ships they sold for scrap to be used for anything other than scrapping. Wikipedia 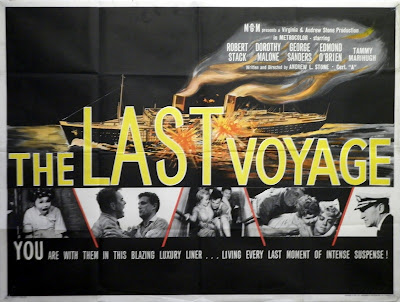 The Last Voyage is a 1960 American disaster film written and directed by Andrew L. Stone. It stars Robert Stack and Dorothy Malone.

The screenplay centers on the sinking of an aged ocean liner in the Pacific Ocean following an explosion in the boiler room. There are some plot similarities to the disaster involving the Italian liner SS Andrea Doria, which sank after a collision four years earlier. Read more on Wikipedia

There also seems a certain irony in the title of the film - Last Voyage - when Lowry wanted to see all his work collected in one opus - The Voyage That Never Ends. 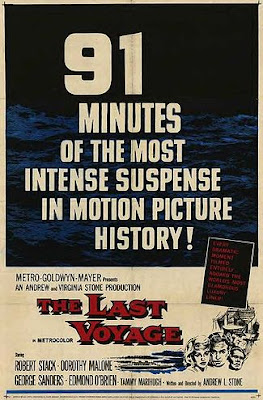 The Last Voyage is an archetypal disaster movie - which has resonance for Malc's life:

Success is like some horrible disastar
Worse than your house burning, the sounds of ruination
As the roof tree falls succeeding each other faster
While you stand, the helpless witness to your damnation
Poem 1945-6

Thanks to Annick for inspiring this post.
Posted by Keeping Soul Alive at 08:50 No comments: 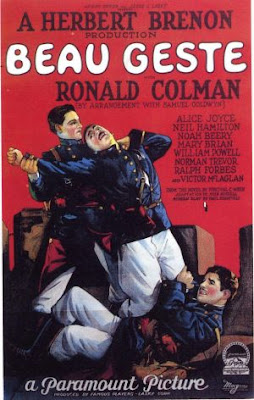 Barban and Nicole continue their walk along the deck. They discuss the respective merits of English and French languages for expressing heroism and gallantry with dignity, and the expression of these qualities in movies, such as the 1926 American film Beau Geste, starring Ronald Coleman. Miguel Mota and Paul Tiessen: The Cinema of Malcolm Lowry: A Scholarly Edition of Lowry's "Tender is the Night

Beau Geste was directed by Herbert Brenon, stars Ronald Colman and Neil Hamilton, with support from Noah Beery (Sr.), Mary Brian, William Powell and Victor McLaglen. The plot concerns a valuable gem, which one of the Geste brothers, Beau, is thought to have stolen from his adoptive family.

Ronald Colman plays the title role in the first of several screen adaptations of Christopher Wren's tale of adventure in the foreign legion. Beau is the youngest of three brothers who fall into an ethical dilemma when their aunt resorts to stealing valuable jewelry from the family's collection to pay off her home. Beau takes the blame for the crime and, before he can be put in jail, flees the country, with his brothers John (Ralph Forbes) and Digby (Neil Hamilton) in tow. The Geste Brothers eventually join the French Foreign Legion, where they suffer under the tyrannical leadership of the cruel Sgt. Lejaune (Noah Beery Sr.). Unknown to Beau, Lejaune is in cahoots with men who want to capture the Geste Brothers and bring them to justice, but when Arab forces attack the Legion compound, the valiant Gestes fight with such bravery that even Lejaune is impressed with their selfless courage. It's said that Ronald Colman considered his performance in Beau Geste the finest work of his career; lip readers might get a chuckle out of some of Noah Beery Sr.'s non-subtitled dialogue, which today would have pushed the film into an R rating if it were audible. ~ Mark Deming, All Movie Guide 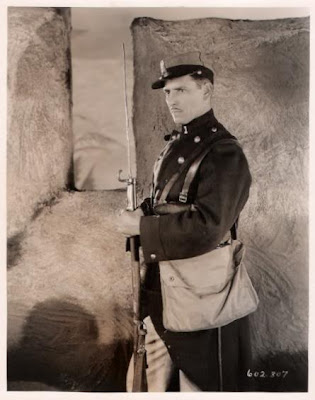 A corking picture, but as a road show special not entirely surefire. The idea is that it will have to hold to just a few cities outside of New York to have a chance at $2. As a straight program leader it can't miss, although the running time of 129 minutes may keep it from equalling house records".

It's a "man's" picture, much more so than "The Big Parade." The story revolves around three brothers and their love for each other. And a great looking trio--Colman, Hamilton and Forbes. Beyond that the love interest is strictly secondary, practically nil. Which brings up the question as to how women are going to like it.Review from Variety, September 1, 1926

Read more on the the film at ERBzine and Stanford University

The best resource materials on the film can be found at Demonoid.me including contemporary magazine articles on the making of the film.

You can watch the film on You Tube: 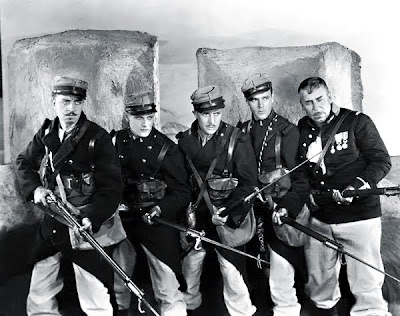