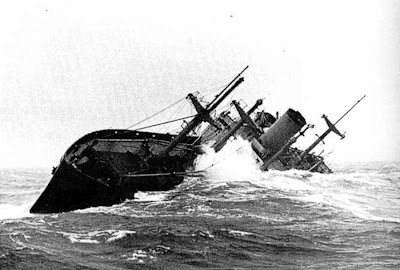 Another Ship to starboard: Flying Enterprise. Pretty name 'Through The Panama

I have recently been researching all the ships either mentioned by Lowry in his work or ships he was associated with in one way or another. One consistent theme in my research is that many of the ships relating to Malc had unfortunate ends. This was something which Malc himself recognised in a letter to Conrad Aiken dated 3 March 1940;

Ariadne N Pandelis and Herzogin Cecile in In Ballast went to the bottom a few weeks after I had written about them... But that is nothing to what happened, by coincidence, to two ships, real and imaginary, in my first early plagiaristic paen to puberty, Ultramarine.

He goes on to describe the fate of the Pyrrhus and the Wolfsberg before coming back to the idea of correspondences:

Nothing in it my dear fellows, but these here correspondences of the subnormal world with the abnormally suspicious are damned queer, if you like to think so. Joyce says that nearly all the characters mentioned in the funeral scene in Ulysses, or people with the same names, have met a strange fate.....

One such ship that Malc wrote about was the S.S. Flying Enterprise which later went to the bottom of the English Channel:

Cape Kumukaki was built by Consolidated Steel Corporation of Wilmington, California and launched on 7 January 1944. Delivered on 18 March 1944, she was owned by the United States War Shipping Administration and registered at Los Angeles.

After the end of World War II, she was sold in 1947 to the Isbrandtsen Company. At this time, her name was changed to the Flying Enterprise and re-registered in New York. For the next five years, she was used as a general cargo freighter in the North Atlantic.

Four days later, on Christmas night, she encountered a storm in the Western Approaches to the English Channel. Afterwards, it was discovered that she had suffered structural damage and a crack was found across the weather deck. The cargo then shifted. An SOS was issued on 28 December, by which time she was listing 45 degrees to port. The SS Southland and USS General A. W. Greely responded. On 29 December 1951, the crew and passengers were evacuated with the loss of one life (a male passenger). Captain Carlsen remained on board.

By 2 January 1952, the USS John W. Weeks had arrived and relieved the merchant ships. The following day, the tug Turmoil arrived, guided by the searchlights from USS John W Weeks, but found it impossible to take the Flying Enterprise in tow. The tug's mate, Kenneth Dancy, was then transferred to the Flying Enterprise on 4 January, by which time the list had increased to 60 degrees. The ship was taken in tow on 5 January, when she was some 300 nautical miles (560 km) from Falmouth, Cornwall. On 6 January, USS Willard Keith relieved the John W Weeks and the French tug Abeille 25 also joined the rescue effort. The tow line parted at 01:30 on 10 January, with Flying Enterprise 31 nautical miles (57 km) south of The Lizard and 41 nautical miles (76 km) from Falmouth. Later that day, the Turmoil was joined by the Trinity House vessel Satellite and the tugs Dexterous and Englishman. Carlsen and Dancy finally abandoned ship at 15:22 hrs and were picked up by Turmoil. The Flying Enterprise sank at 16:10 hrs to whistle, siren and foghorn salutes from the flotilla.

The salvage attempts were criticised as the ship might have been saved by heading for the nearest safe harbour, Cork, rather than Falmouth. Read more on Wikipedia

Malc would have like a further correspondence in the caption below describing the ship as "lying a great whale" as in the letter to Aiken he refers to the fate of Melville's Pequod: 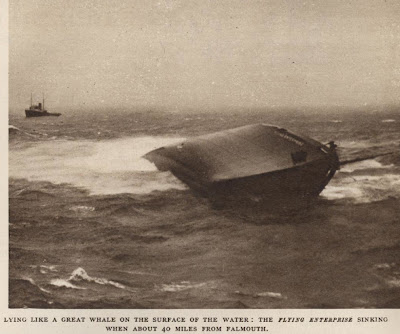 You can view more photos on the Wrecksite
Posted by Keeping Soul Alive at 04:55