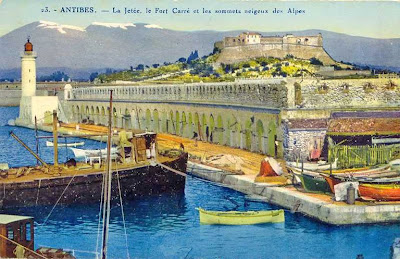 Here is an extract from "Madame Parisse":

I was sitting on the pier of the small port of Obernon, near the village of Salis, looking at Antibes, bathed in the setting sun. I had never before seen anything so wonderful and so beautiful.

The small town, enclosed by its massive ramparts, built by Monsieur de Vauban, extended into the open sea, in the middle of the immense Gulf of Nice. The great waves, coming in from the ocean, broke at its feet, surrounding it with a wreath of foam; and beyond the ramparts the houses climbed up the hill, one after the other, as far as the two towers, which rose up into the sky, like the peaks of an ancient helmet. And these two towers were outlined against the milky whiteness of the Alps, that enormous distant wall of snow which enclosed the entire horizon.

Between the white foam at the foot of the walls and the white snow on the sky-line the little city, dazzling against the bluish background of the nearest mountain ranges, presented to the rays of the setting sun a pyramid of red-roofed houses, whose facades were also white, but so different one from another that they seemed to be of all tints.

And the sky above the Alps was itself of a blue that was almost white, as if the snow had tinted it; some silvery clouds were floating just over the pale summits, and on the other side of the gulf Nice, lying close to the water, stretched like a white thread between the sea and the mountain. Two great sails, driven by a strong breeze, seemed to skim over the waves. I looked upon all this, astounded.

This view was one of those sweet, rare, delightful things that seem to permeate you and are unforgettable, like the memory of a great happiness. One sees, thinks, suffers, is moved and loves with the eyes. He who can feel with the eye experiences the same keen, exquisite and deep pleasure in looking at men and things as the man with the delicate and sensitive ear, whose soul music overwhelms. Read the full story here
Posted by Keeping Soul Alive at 04:26