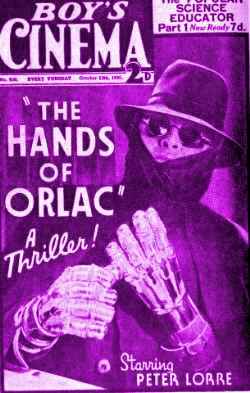 Yet what a complicated endless tale it seemed to tell, of tyranny and sanctuary, that poster looming above him now, showing the murderer Orlac! An artist with a murderer’s hands; that was the ticket, the hieroglyphic of the times. For it was Germany itself that, in the gruesome degradation of a bad cartoon, stood over him, Or was it , by some uncomfortable stretch of the imagination, M. Laruelle himself? Malcolm Lowry; Under The Volcano

Laruelle sets out towards sunset on the Day of The Dead 1939 to walk home taking him past Quauhnahuac’s (the fictional Cuernavaca) cinema. During a thunderstorm, he stops to take shelter in the cinema’s entrance where he sees the poster advertising the film La Manos de Orlac starring Peter Lorre. Coincidentally, the film had been shown on the same day the previous year when the Consul is murdered. The re-run of the film becomes another factor in Laruelle re-living the events of the previous year. 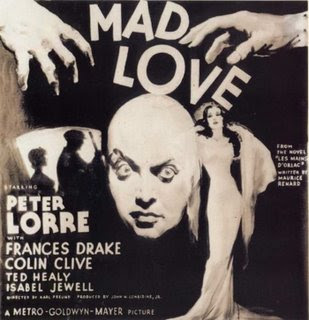 Hopefully, Las Manos de Orlac (The Hands of Orlac) aka Mad Love will be shown at the Lowry Festival in Liverpool later this year. 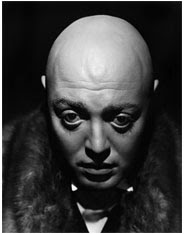 Mad Love is a 1935 American horror film adaption of Maurice Renard's story The Hands of Orlac. Directed by German emigré film maker Karl Freund, the film stars Peter Lorre as Dr. Gogol, Frances Drake as Yvonne Orlac and Colin Clive as Stephen Orlac. The film was a remake of the 1924 Orlacs Hände directed by Robert Wiene with Conrad Veidt in the title role. 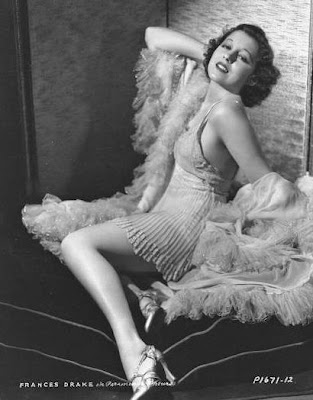 The plot revolves around Doctor Gogol's obsession over actress Yvonne Orlac. Lowry may have decided to name Yvonne, the heroine of the Under The Volcano, after the film’s character. When Stephen Orlac's hands are destroyed in a train accident, Yvonne brings him to Gogol who is able repair them by grafting on the hands of a murderer Rollo who has recently been guillotined. As Gogol's obsession over Yvonne leads him into doing anything to have her, Stephen Orlac finds that his new hands have made him into an expert knife thrower. Read more on Wikipedia.

It has been noted by commentators on Lowry that there are remote parallels between the film and Under The Volcano since the main characters on in love with a heroine called Yvonne (See Chris Ackerley A Companion To Under The Volcano). The bloody hands of Orlac become to symbolise the collective guilt of mankind (see Lowry’s Letter To Jonathan Cape in Selected Letters).

The film is a powerful precursor to the horrors which were about to explode in the Second World War. Lowry probably knew the 1924 German Expressionistic original by Robert Wiene from his days at Cambridge University. Perhaps Lowry was eager to use the remake, which explores a Grand Guignol setting, to expose us to the true horrors of man. In the film, Yvonne actually works in a Grand Guignol theatre group that specializes in set pieces revolving around torture and humiliation. In the lobby of the theatre, there is a wax sculpture of Yvonne (played by Frances Drake, in a duel role). Lowry may have also recalled the wax models used to illustrate the perils of illicit sex displayed in the Anatomy Museum in Liverpool’s Paradise Street.

The film has provoked some interesting pieces which you can read here:

The Hands of Orlac / Orlacs Hände (1924/1928)
Mad Love 1935
The Hand: Digits Of Death
The Grimm Roots Of Horror
Of mad love, alien hands and the film under your skin
Hands Of Orlac Review

Incidently, the film was shown last February in Cuernavaca during a Lowry Day at the Morelos Cinema where 70 years ago "Mad Love" was projected by Oscar Menéndez. Check out Alberto Rebollo, The Malcolm Lowry Foundation pages on the event.

The accompanying movie clips with the original post have been removed from You Tube.

You can view snippets:

You can still buy the movie on DVD
Posted by Keeping Soul Alive at 02:03