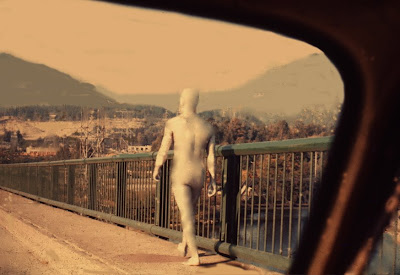 Lowry has inspired many artists including Tom Burrows. The above is a photo of Burrow's 1970 work:

Bridge Walk a.k.a. The Return of Malcolm Lowry

Duration: the length of time to cross the bridge, walking briskly to the North.

Historical Context: Since its opening in 1960 the second Narrows Bridge, with constricted linearity and regimented speed of transit, was the major artery from the urban core of Vancouver to the amorphous open nature of the north shore tidal flats. Burrows (the sculptor) moved into a self-built squatter cabin on the north shore Maple Wood tidal flats in June of 1969. The same career municipal employee who bulldozed Malcolm Lowry’s squatter home on a tidal area adjacent to the Maple Wood flats in 1954, organized the burning of the Burrows cabin in Dec. 1971.

P.S. Lowry’s first squatter cabin burned in 1944 incinerating the fourth draft of Under the Volcano.

Posted by Keeping Soul Alive at 14:54