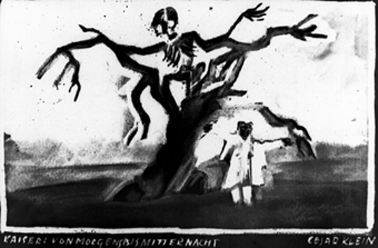 Lowry's works are littered with allusions to German Expressionist films and theatre. Chris Ackerley recently pointed me in the direction of one contained in Lowry's Swinging The Maelstrom (an early version of the published Lunar Caustic:

the interminable helpful nonexistent conversations going on all the bloody night, clinching one's case and pointing a solution, a way out to the light and freedom, though in the morning, which always turns out to be midnight, only the gulf is there as usual.

The allusion is to Georg Kaiser's play Von Morgen bis Mitternachts (From Morn To Midnight) 1917. Friedrich Carl Georg Kaiser, called Georg Kaiser, (November 25, 1878 in Magdeburg, Germany – June 4, 1945 in Ascona, Switzerland) was a German dramatist. Although he was highly prolific and wrote in a number of different styles, he made his mark as the most successful expressionist dramatist and, along with Gerhart Hauptmann, the most frequently performed playwright in the Weimar Republic. Georg Kaiser's best known plays include The Burghers of Calais (1913), From Morn to Midnight (1912), and a trilogy, comprising The Coral (1917), Gas (1918), Gas II (1920).Read more on Wikipedia

Lowry mentions this play in his famous letter to the Norwegian writer Nordahl Grieg dated 8th September 1931. He also makes reference in a 1951 letter to Clemens ten Holder that he helped with a production of the play at Cambridge whilst he was as student. In the same letter, he writes that he had seen Claude Rains in a production of Von Morgen bis Mitternachts. According to R.S. Furness in Expressionism, Claude Rains acted the role of the cashier in Ashley Dukes's Stage Society production at the Gate Theatre, London in 1925 based on Duke's translation of Kaiser's play.

The history of London's Gate Theatre Studio, often referred to as simply the Gate Theatre, is typical of many small independent theatres of the period.

Founded in October 1925 by Peter Godfrey, a conjurer and clown, and his wife Molly Veness, the theatre was originally on the top floor of a ramshackle warehouse at 38 Floral Street, Covent Garden. Then known as the Gate Theatre Salon (The Gate to Better Things), it could hold an audience of 96, and opened on 30 October 1925 with Godfrey's production of Susan Glaspell's Berenice, starring Veness as Margaret, 'the searcher for truth', and which ran for a fortnight.

With a series of challenging productions, including August Strindberg's The Dance of Death, the Gate struggled to survive without attracting any particular attention, until the Sunday Times critic James Agate, enthusiastically reviewing Georg Kaiser's From Morn to Midnight, urged his readers to apply for membership of the theatre and to go and see the production. But at the end of a scheduled three-week run the play was transferred to the Regent Theatre in King's Cross when Claude Rains took over the leading role from Godfrey. Read more on Wikipedia

The review by James Agate is contained in his book Red Letter Nights and is dated March 14th 1926.

I am uncertain whether the 1926 production is the one Lowry is referring to because he writes to ten Holder that he had seen the play prior to him visiting Germany in 1928.

Interestingly, Kaiser’s From Morn to Midnight, was staged by Peter Godfrey for Terence Gray's Festival Theatre Cambridge in February 1928. The Festival Theatre on Newmarket Road, Cambridge, was founded by Terence Gray, the son of an Irish aristocrat, in 1926. Lowry would later have his poem "In Cape Cod With Conrad Aiken" published in the Cambridge Theatre Programme in March 1930. 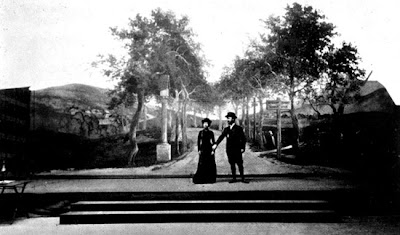 The play was also turned into a film by Karl Heinz Martin in 1920:

The film version has the Cashier (played by Ernst Deutsch in Martin's film) in a small bank in W. (ostensibly Weimar) who is alerted to the power of money by the visit of a rich Italian lady. He embezzles 60,000 Marks and absconds to B. (Berlin) where he attempts to find transcendent experiences in sport, romance and religion, only to be ultimately frustrated. Kaiser's classic expressionist plays, written just before and during the Great War, often called for man to make a decisive break with the past, rejuvenating contemporary society. He eschewed characterization, and particularly character psychology, instead making his protagonists and other characters archetypes, employing highly anti-naturalistic dialogue often comprising lengthy individual speeches. Wikipedia 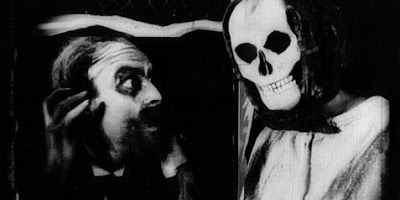 The film version begins with a bank clerk (Ernst Deutsch) becoming obsessed with a female customer (Erna Morena). His libido awakened, the clerk steals money from the bank only to discover that the female customer is in fact a respectable lady accompanying her son on a study tour. She is not the kind to drop everything for a few days' fun with a bank clerk on the run from the law. Horrified to learn that he has thrown his life away for nothing, the clerk flees and experiences a terrifying vision of death.

This causes him to return home to his wife and children only to reveal to them that he is on the run from the law. This revelation kills his wife stone dead. The clerk then kicks up his heels by betting on cycle races and cavorting with prostitutes and finishes the night with the salvation army where, inspired by the confessions of the down-and-outs he throws his money away. Sadly, this act of repentance comes too late.

The damage is done and the police are closing in on him thanks to a tip provided by a member of the salvation army who provides the clerk with another vision of death. With all hope gone, the clerk shoots himself and dies slumped against a crucifix with the words 'Ecce Homo' glowing above him. An inscription that means 'behold the man' and which is usually associated with the flagellation of Jesus suggesting that the clerk's fall from grace is less a story of moral failure than of a man broken by the world. Read the rest of this excellent essay Apocalyptic Adolescence: 10 Works Of German Expressionist Cinema by Jonathan McCalmont on Video Vista

The good news is that I have just read that Karl Heinz Martin's film version of the play is due for DVD release. Read more on The Bioscope.
Posted by Keeping Soul Alive at 10:55