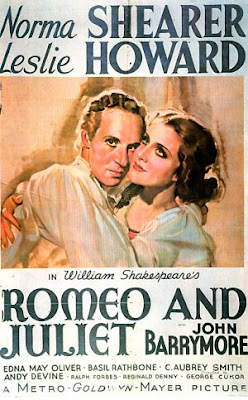 He had played the piano all night - how long was it since he had left the tavern early this morning? He started across the street away from the hospital and was nearly run over by a streetcar. Signs nodded past him: the best for less, Romeo and Juliet, the greatest love story in the world, no cover at any time. Malcolm Lowry Swinging The Maelstrom

Lowry is referring in the above passage from Swinging The Maelstrom to the 1936 George Cukor film of Shakespeare's play featuring Norma Shearer and Leslie Howard.

Despite the care and attention that went into its production, this film has never been highly regarded. At enormous expense an entire replica, based on first-hand photographs, of an Italian Renaissance city was constructed on a Hollywood back lot. No expense was spared to achieve historical accuracy. Professor Strunk was brought from Cornell University to insure academic respectability and the greatest stars of the day were cast in major roles: Norma Shearer as Juliet, Leslie Howard as Romeo, John Barrymore as Mercutio, Basil Rathbone as Tybalt, and so forth. The Capulet ballroom scene rivalled a Busby Berkeley musical extravaganza. Yet for all these good intentions, the film did poorly both at the box office and at the hands of critics. The leading players, it was said, were too old for the teenage lovers, and yet decades later Zeffirelli would be denounced for having cast actors who were too inexperienced for the roles. I believe the film should be cherished as a masterwork from antiquity: a bit archaic, a little rigid, slightly overdone, but, yes, still withal warm and good Internet Shakespeare 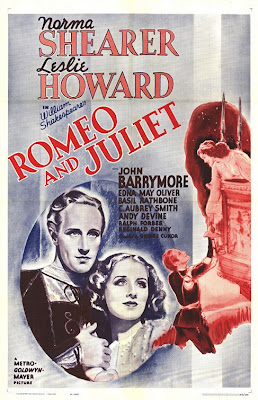 Posted by Keeping Soul Alive at 04:22