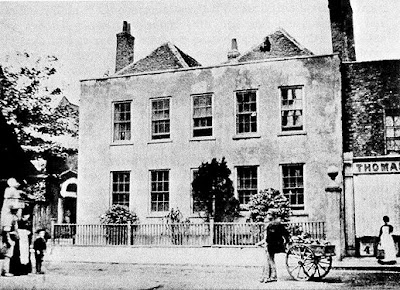 The ability had often stood him in good stead during that very time of darkness and misery at prep school, exhibiting, in those early Stoke-Newington days, and long before he found he had a truly encyclopedic memory October Ferry to Gabriola

In October Ferry to Gabriola, the main character Ethan identifies himself with Edgar Poe because both attended Manor House school in Stoke Newington. Poe lurks in the background of October Ferry - you can read more on Poe's presence in Anthony Kilgallin's "The Long Voyage Home" in George Woodcock's Malcolm Lowry The Man And His Work. One possible source for the reference to the school was Lowry's visit to the Valentine Museum in Richmond which features in his short story 'Strange Comfort Afforded by the Profession'.

You can read the details of Poe's time at the school in the excellent Poe Log:

On or about 11 December 1811 Poe’s father may have died. On the death of his mother, 8 December 1811, in Richmond, Virginia, Poe is taken into the home of John Allan, of the merchant firm of Ellis & Allan, and Allan is added to his name. Accompanying John Allan to Scotland, where are visited his family and friends, and to London, England, where in 1815 a branch of the Richmond firm is established, are his wife Frances Keeling Valentine Allan, his wife’s sister Ann Moore Valentine, and Poe. Poe is first tutored by the Misses Dubourg in London; later he attends the Manor House School of the Reverend John Bransby at Stoke Newington. Read more on Poe Log.

The above photograph is from Arthur Hobson Quinn's Edgar Allan Poe: A Critical Biography 1941 in which he says of the school:

The Manor House School is of singular interest. In his story of “William Wilson” Poe described in terms of fiction not only the place, but also its master, to whom he gave his right name of Bransby, with the addition of a “Doctor” to which the reverend gentleman seems not to be entitled. Since our interest in the school lies entirely in Poe’s connection with it, William Wilson’s own words are better than any paraphrase:

My earliest recollections of a school-life are connected with a large, rambling, cottage-built, and somewhat decayed building in a misty-looking village of England, where were a vast number of gigantic and gnarled trees, and where all the houses were excessively ancient and inordinately tall. In truth, it was a dream-like and spirit-soothing place, that venerable old town. At this moment, in fancy, I feel the refreshing chilliness of its deeply-shadowed avenues, inhale the fragrance of its thousand shrubberies, and thrill anew with undefinable delight, at the deep, hollow note of the church-bell, breaking each hour, with sullen and sudden roar, upon the stillness of the dusky atmosphere in which the old, fretted, Gothic steeple lay imbedded and asleep. Read more
Posted by Keeping Soul Alive at 14:33