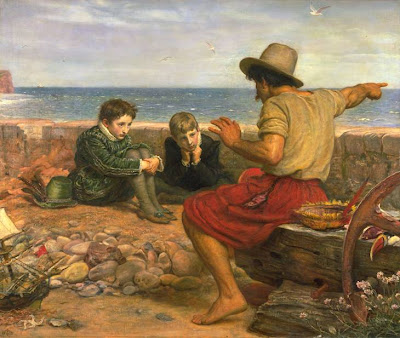 Oh , Hugh saw, it was a grotesque and pathetic picture enough, that of the youth who imagined himself a cross between Bix Beiderbecke, whose first records had just appeared in England, the infant Mozart, and the childhood of Raleigh, signing on the dotted line in that office....... Under The Volcano

Chris Ackerley in his annotations to Under The Volcano has pointed out the of the allusion to Sir Walter Raleigh:

....but Hugh has in mind the painting by Sir John Everett Millais, 'The Boyhood of Raleigh' (1870), now at the Tate, which depicts a small boy sitting at the foot of a sailor, listening spellbound to tales of the sea. In October Ferry [152], the painting is mentioned by name.

There is little doubt that Lowry would have known such a famous painting. However, there is another reason why Malc may have chosen to emulate Raleigh:

The Boyhood of Raleigh is a painting by John Everett Millais, which was exhibited at the Royal Academy in 1871. It came to epitomise the culture of heroic imperialism in late Victorian Britain and in British popular culture up to the mid-twentieth century.

The painting depicts the young, wide-eyed Sir Walter Raleigh and his brother sitting on the beach by the Devonshire coast. He is listening to a story of life on the seas, told by an experienced sailor who points out to the sea.

The painting was influenced by an essay written by James Anthony Froude on England's Forgotten Worthies, which described the lives of Elizabethan seafarers. It was also probably influenced by a contemporaneous biography of Raleigh, which imagined his experiences listening to old sailors as a boy. Millais travelled to Budleigh Salterton to paint the location.

Millais's sons Everett and George modelled for the boys. The sailor was a professional model. Millais' friend and biographer, the critic Marion Spielmann, stated that he was intended to be Genoese. He also argues that the sailor is pointing south towards the "Spanish main". Wikipedia 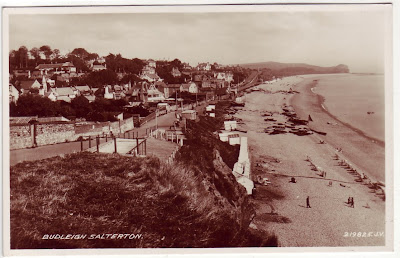 There is a connection between the location of the painting and Malc in that he spent a summer holiday with his family in Budleigh Salterton in 1924. You can imagine a young Malc obsessed by the sea "re-living" the tale told by the painting on the beach. Malc may have even visited Raleigh's childhood home at Hayes Barton, a farmhouse in the village of East Budleigh, not far from Budleigh Salterton. 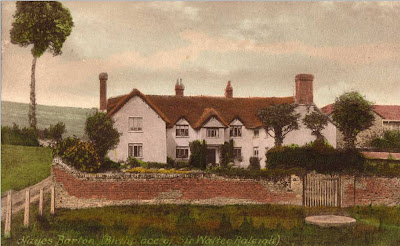 Posted by Keeping Soul Alive at 15:00

Email ThisBlogThis!Share to TwitterShare to FacebookShare to Pinterest
Labels: Budleigh Salterton, Millais's The Boyhood of Raleigh, Sir Walter Raleigh, Under The Volcano