The Cabinet Of Dr Caligari 1920

The Cabinet of Dr. Caligari (German: Das Cabinet des Dr. Caligari) is a 1920 silent film directed by Robert Wiene from a screenplay by Hans Janowitz and Carl Mayer. It is one of the most influential of German Expressionist films.

The film was a favourite of Malc. The film is being shown as part of the festival in Liverpool to celebrate Lowry's centenary later this year. Lowry could have been first first exposed to the film during his forays to the Century Cinema in Liverpool but he could have also seen the film in Germany on his visit in 1928.

We can gauge the importance of The Cabinet Of Dr Caligari and other German Expressionist films to Lowry when he voiced to Clemens ten Holder in a 1951 letter, that he would be very happy to have his novel Under the Volcano made in German in the style of the great Expressionist movies such as Caligari. 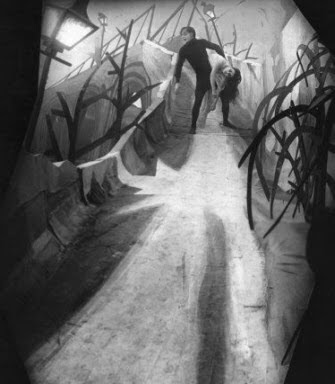 The deranged Dr. Caligari and his faithful sleepwalking Cesare are connected to a series of murders in a German mountain village, Holstenwall. Caligari presents an example of a motion picture "frame story" in which most of the plot is presented as a "flashback", as told by Francis.

The narrator, Francis, and his friend Alan visit a carnival in the village where they see Dr. Caligari and the somnambulist Cesare, whom the doctor is displaying as an attraction. Caligari brags that Cesare can answer any question he is asked. When Alan asks Cesare how long he has to live, Cesare tells Alan that he will die before dawn tomorrow – a prophecy which is fulfilled.

Francis, along with his girlfriend Jane, investigate Caligari and Cesare, which eventually results in Cesare kidnapping Jane. Caligari orders Cesare to kill Jane, but the hypnotized slave refuses after her beauty captivates him. He carries Jane out of her house, leading the townsfolk on a lengthy chase. Cesare falls to his death during the pursuit, and the townsfolk discover that Caligari had created a dummy to distract Francis. 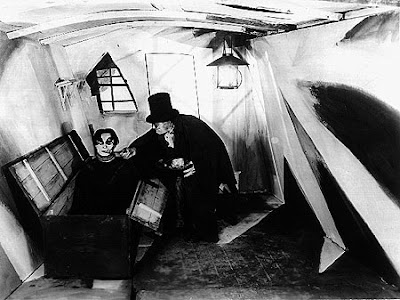 Francis discovers that "Caligari" is actually the director of the local insane asylum, and, with the help of his colleagues, discovers that he is obsessed with the story of a Dr. Caligari, who, in 1703, in northern Italy used a somnambulist to murder people as a traveling act. After being confronted with the dead Cesare, Caligari reveals his mania and is imprisoned in his asylum.

A "twist ending" reveals that Francis' flashback is actually his fantasy: he, Jane and Cesare are all inmates of the insane asylum, and the man he says is Caligari is his asylum doctor, who, after this revelation of the source of his patient's delusion, says that now he will be able to cure Francis.
Wikipedia

Here is a highly quality clip which I have recently come across and is a better print than the whole movie clip on Internet Archive:

While researching this post, I came across a very interesting 2005 project which involved a re-make of the film which is described in the 2 videos below and sounds fascinating. I am yet to see the finished product.

Posted by Keeping Soul Alive at 13:43