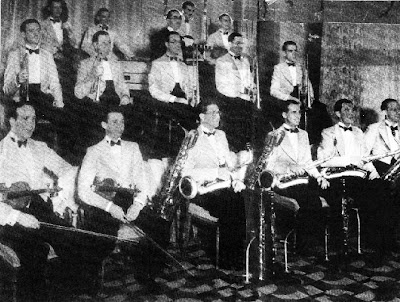 Dancing was the force driving hotels to provide venues for bands and for places where patrons might dance. However, as in the USA, it was the development of Radio Broadcasting that may have done the most to establish dance bands as national institutions. On March 26, 1923, Marius B. Winter's band was the first to broadcast (using the attic of Marconi House in London as a studio).

The first major influence on British Popular music was London's Savoy Hotel. The two main bands to consider are the New York Havana Orchestra and the Savoy Orpheans. As early as 1916, a group known as the Savoy Quartette had taken up residence at the Savoy, and remained resident until 1920. But, their music was quite different from the music that was to sweep the world starting about 1920. 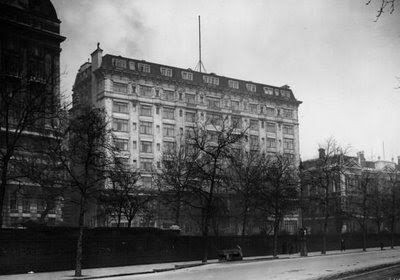 In 1919, Bert Ralton an American Saxophonist, left Art Hickman's band in New York City, went to Havana, Cuba, and formed his own band. About 1920/1, he arrived in England, and, in March of 1922, his New York Havana Band played at London's Coliseum. A few months later they opened at the Savoy Hotel as the Savoy Havana Band. On April 23, 1922, they first broadcast from a BBC studio, and 5 months later became the first dance band to have regular, weekly broadcasts remoted from the Savoy Hotel.

The next important date in British music occurred in 1923 when Debroy Somers formed his Savoy Orpheans Orchestra. Rudy Vallee was still there, as was Billy Thorburn on piano, and now Carroll Gibbons. It should be noted that the New York Havana Band, or Savoy Havana Band as they came to be called, were indeed quite popular, but they never achieved the same fame as the Savoy Orpheans. When Somers left in 1926, Cyril Newton became the leader. Carroll Gibbons became leader in 1927. (And, the American, Frank Guarente, who had been touring with his "New Georgians Orch", joined the band.) Both of these fine orchestras were resident at the Savoy until 1927, when William de Mornys, the agent for both the bands, withdrew them due to the Savoy's refusal in allowing them to play other engagements.

Carroll Gibbons and Teddy Sinclair became co-leaders of "The "Original Savoy Orpheans" that now included trumpeters Max Goldberg and Frank Guarente. While in 1928, Reg Batten became the leader of "The New Savoy Orpheans" that included American's Sylvester Ahola on trumpet and Irving Brodsky on piano. Savoy and Popular Music

In 1926, Lowry mentions the Savoy Orpheans twice in letters to his teenage friend Carol Brown. I presume that Lowry as a school boy probably couldn't attend The Savoy and was only familiar with their broadcasts.

I have recently discovered The Dance Band Show which is an excellent resource on UK dance bands giving a flavour of what young Malc may have been listening to on the radio before he discovered American jazz.

If you want a flavour of some of the clientele at the Savoy at his time then look no fiurther than the ever excellent Another Nickel In The Machines's feature on The Murder of Ali Fahmy At The Savoy Hotel.
Posted by Keeping Soul Alive at 05:21

Email ThisBlogThis!Share to TwitterShare to FacebookShare to Pinterest
Labels: Carol Brown, Dance Bands, Malc At The Leys, The Savoy Orpheans