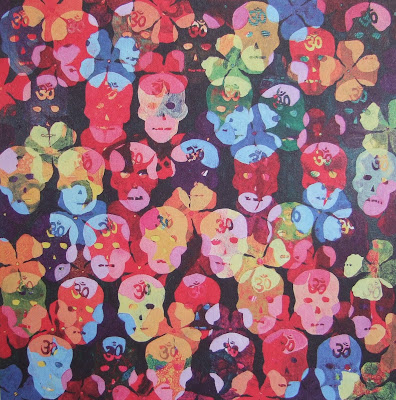 Pete Flowers' interest in Mexico was awakened by reading Under the Volcano.
It introduced him to the Day of the Dead, which has become a life-long fascination. Flowers sees parallels between his work and Lowry's, for instance the way - as suggested by Michael Schmidt in the introduction to the book's current edition - that the writer's 'imagination exaggerates and distorts, forces connections and recurrences' . Like Lowry's fiction, Flowers' paintings use montage technique and are worked over and over again, becoming dense and complex in the process. Like Lowry, he is also drawn to the spiritual, referencing Eastern beliefs and religions.

Of the paintings here, two refer directly to the book, interwoven with Flowers' experiences visiting Mexico, where 'you very quickly become aware of the fact that you are always under the volcano'. A Prayer for the Consul is a memory of being mistaken for Christ in a cantina by a beggar who pinned two medallions of the virgin under his lapel. The idea for this painting and A Prayer for Malcolm, came from a votive candle of the Virgin of Guadalupe that Flowers' wife bought him. On the back of this is a prayer for those involved in the abuse of drugs and alcohol, although 'she claims not to have read the prayer when she bought it'.
Bryan Biggs Artistic Director The Bluecoat Liverpool: Under The Volcano; An Exhibition for Malcolm Lowry 1909-1957
Posted by Keeping Soul Alive at 06:57

Email ThisBlogThis!Share to TwitterShare to FacebookShare to Pinterest
Labels: Art Inspired By Lowry, Under The Volcano; An Exhibition for Malcolm Lowry 1909-1957