'Jacques means the film he made out of Alastor before he went to Hollywood, which he shot in a bathtub, what he could of it, and apparently struck the rest together with sequences of ruins cut out of old travelogues, and a jungle hoiked out of In dunkelste Afrika, and a swan out of the end of some old Corinne Griffith ... while all the time the poet was standing on the shore, and the orchestra was supposed to be doing its best with the Sacre du Printemps. I think I forgot the fog.' – Under The Volcano

Lowry's Under The Volcano has many cinematic references. One of the most intriguing is the one above. I have taken the ingredients mentioned by Lowry and tried to concoct an impression of what Laruelle's film may have looked like - all tongue in cheek of course and following Malc's humorous touches.

The first clip of film is from a movie detailing a cruise of the S.S. France and a 2500 mile trek by motor across Tunisia, Algeria and Morocco.Transferred from original 35mm nitrate print. The second clip is a theatrical trailer for the first Republic Pictures' serial, starring Clyde Beatty and Manuel King.

Unfortunately, I have not been able to find the sequence out of the Corrine Griffith movie but I have found a delightful Youtube clip of sequences from The Garden of Eden which featured the swan sequence.

Inspiration for this post must go to Chris Ackerley whose superb reference work to Under The Volcano contains a host of material to understand Lowry's master work. Chris explains that many of the details of Jacques's film, only slightly modified, can be recognised in Shelley's poem Alastor.

Here is the soundtrack for Laruelle's film:

Chris Ackerley suggests on his website, that the film Lowry may be referring to as a source for In dunkelste Afrika, could be the 1927 film by Harry K. Eustace's Through Darkest Africa: In Search of White Rhinoceros.

Another possibility is the now distasteful film called Africa Speaks a 1930 American documentary film directed by Walter Futter narrated by Lowell Thomas. Explorer Paul Hoefler leads a safari into central Africa and what was then called the Belgian Congo, in the regions inhabited by the Wassara and the famous Ubangi tribes.

You can view the entire documentary on the Internet Archive. 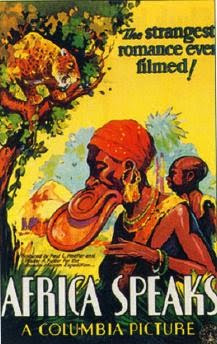 Following the success of the 1927 adventure Bushman, Paul Hoeffler, a renowned adventurer teamed up with Harold Austin, a Californian and set off in search of "a land of giants, pygmies disk-lipped women and other curiosities found in Africa." This film records their daring adventures as they traverse the great African continent.

This thrilling film documents live action from the first ever trans-African journey by motor truck from the Indian Ocean to Central Equatorial Africa. Along the way adventurers Paul Hoefler (himself) and Harold Austin (himself) come across some of the most fascinating and largely unknown tribes and wild creatures that inhabit the great African plains. They cross paths with huge four- ton bull elephants, edgy and unpredictable white rhinos and a monstrous swarm of dreaded locusts. None of these however, prepare them for their encounter with a pride of lions, which, without apparent cause or warning, attacks the adventurers. Will Paul and Austin live through this horrendous experience to witness another splendid African sunrise? The Actor
Posted by Keeping Soul Alive at 03:56

Email ThisBlogThis!Share to TwitterShare to FacebookShare to Pinterest
Labels: Lowry's Cinema, Under The Volcano