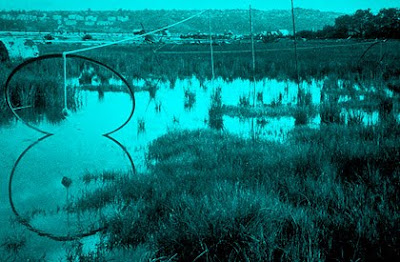 I have only recently come across the above exhibition held in Vancouver early this year. The above is an image entitled Untitled sculpture installed in Dollarton Mud Flats from the show by Tom Burrows, an artist I have already featured on the blog.

The exhibition was curated by Michael Turner who was a fellow contributor to Malcolm Lowry: From The Mersey To The World with a chapter on his former club in Vancouver called The Malcolm Lowry Room.

Here is an extract:

It could be said that modern Vancouver writing began in two places: atop the bluffs at UBC, with English professor Earle Birney, and in a seaside shack at the city’s eastern edge – the Dollarton home of ukelele-playing Malcolm Lowry.

But the distinction does not end there. Although both men were known for their adventure writing, Birney’s best-remembered poems — the silky smooth “David”(1940) and the thoroughly modern “Bushed”(1951) — take place in mountains, on the vertical axis, while Lowry, known for his jagged-wave prose style, set his masterpiece at the base of a volcano, or in the case of his first novel, Ultramarine (1933), at sea level, on the horizontal plane. In temporal terms, what Birney was doing in the forties and fifties had little in common with the first iteration of UBC’s TISH poets (1961–1963) — but the same could not be said of Lowry’s Dollarton successor, the musician, artist and writer Al Neil, whose bricoleur approach to music, sculpture and text had much in common with Lowry’s “Through The Panama”(1954), one of Vancouver’s first examples of collage fiction. Read more
Posted by Keeping Soul Alive at 04:34