Back in 2010, I posted about Ken Lum's installation entitled 'From shangri-la to shangri-la'.

I have since discovered that the installation has a permanent location:

The District of North Vancouver and the North Vancouver Arts Office unveiled Ken Lum’s sculptural installation, “from shangri-la to shangri-la” at the Maplewood Flats Conservation Area (2645 Dollarton Highway). Lum’s work takes its form from the architecture of squatters’ cabins located at Maplewood Flats on the north shore of Burrard Inlet during the early to mid-twentieth century.

By the 1940’s, an informal but cohesive community of squatters was living in the ramshackle cabins that lined the area’s intertidal zone. The most acclaimed resident was the English-born writer Malcolm Lowry, who completed his novel Under the Volcano while living there from 1940 to 1954.

By the 1960’s, the area had attracted an assortment of hippies, artists and displaced loggers who sought out nature and self sufficiency as an alternative to the accelerating pace of development in Vancouver and its suburbs. The longstanding tension between the squatters and the residents of North Vancouver came to a head in December 1971 when most of the mudflat dwellings were burned down by civic authorities to make way for development.

Lum created from shangri-la to shangri-la in 2010 for the Vancouver Art Gallery’s Offsite large scale art program. The work consists of scale replicas of three squatter shacks: the dwelling occupied by Malcolm Lowry, one built by artist Tom Burrows, and one inhabited by Dr. Paul Spong, who later led Greenpeace’s “Save the Whales” campaign.

The artwork was situated on West Georgia Street in downtown Vancouver surrounded by high rise buildings, and adjacent to the City’s tallest building, the Shangri-La Hotel. Considered in relation to the surrounding urban environment, the squatter shacks represented an acute contrast of a rustic conception of the ideal life with contemporary visions of perfection embodied in present day architecture.

Ken Lum gifted from shangri-la to shangri-la to the District of North Vancouver in 2010. Situating the squatter shacks in their original Maplewood Flats location allows viewers to travel back in time and reflect on a foreclosed moment in the history of the Lower Mainland.

Ken Lum is a Vancouver artist whose work questions the relationship between modernism and everyday experience often blurring the boundaries that separate high art and popular culture. Over the past 25 years, Lum has exhibited widely throughout North America, Europe and Asia. 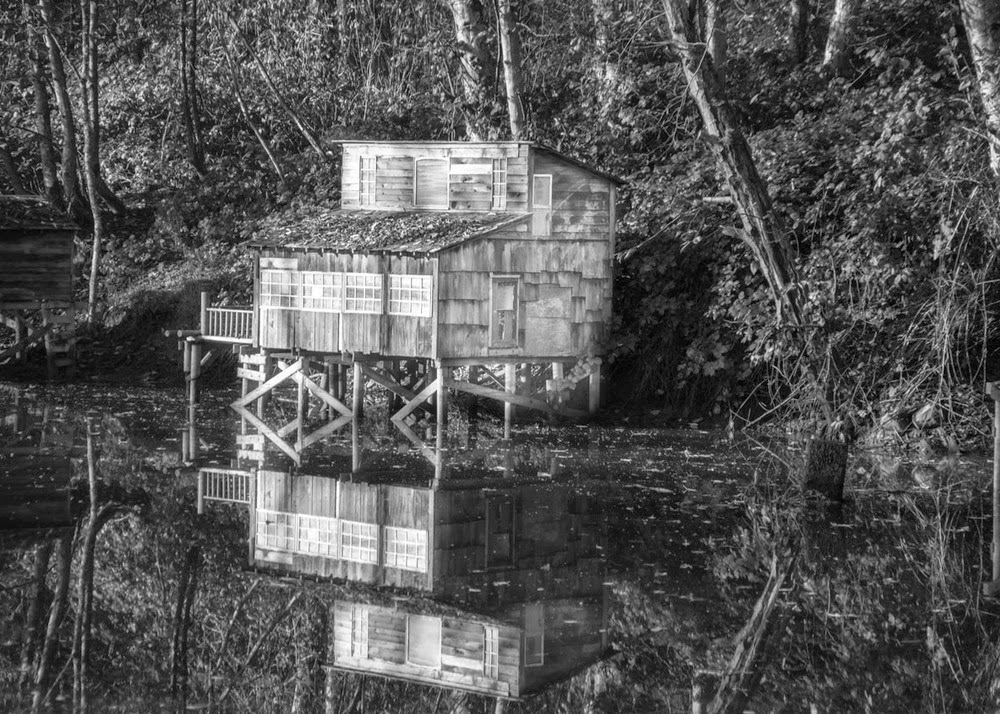 See a collection of photos of the installation at Teregraphic.com
Posted by Keeping Soul Alive at 06:21