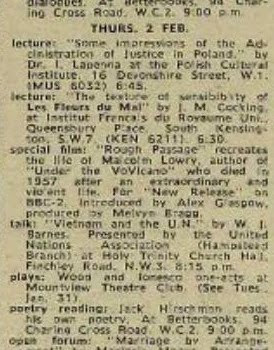 One of the highlights of the recent Lowry Lounge evening at the Bluecoat in Liverpool was the showing of the above.

The documentary was made in 1967 by Melvyn Bragg for BBC2 TV in the UK. The above is a clipping of when it was first shown.

The documentary included material which was later used in the Canadian documentary Volcano: An Inquiry into the Life and Death of Malcolm Lowry by Donald Brittain & John Kramer, 1976.
Posted by Keeping Soul Alive at 07:20

Email ThisBlogThis!Share to TwitterShare to FacebookShare to Pinterest
Labels: Lowry Lounge, Rough Passage, Volcano: An Inquiry into the Life and Death of Malcolm Lowry