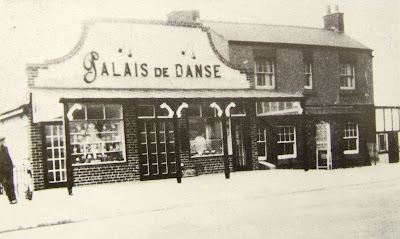 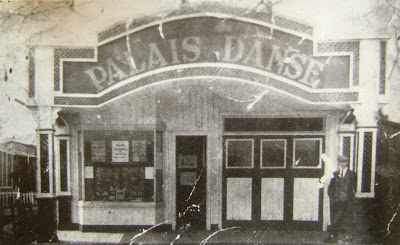 I shut my eyes and imagined that this was indeed Janet and I dancing at the New Brighton Palais De Danse. Ultramarine Pg 106

The Moreton Palais De Danse was built in the early 1900s from 2 army huts and was owned by Mrs Oborn. The house adjourning the dance hall was a former farm cottage and was demolished in the 1960's. However, the dance hall still stands as can be seen in the photographs below. The dance hall is now called The Apollo Club and has gone through many transformations since the 20's including being a skate rink, a community food hall during WW2, the Labour Party Club before reverting back to a dance hall. It is currently the home of the Apollo Dance Club which is run by the Merralls Dance Academy 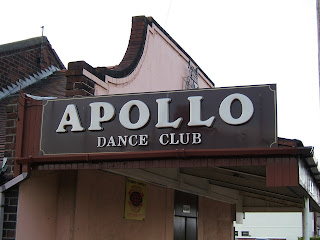 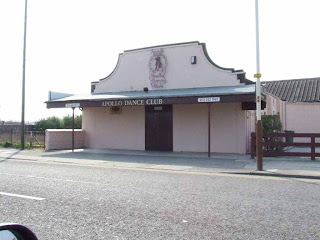 Lowry would have been familiar with Moreton which lies a few miles west of New Brighton where he was born. In the mid-20s, he frequented dance halls and cinemas with Tess Evans (Janet in Ultramarine) on the Wirral. A close reading of Ultramarine reveals that he and Tess wandered all over the north Wirral and it is entirely possible that they frequented the Moreton Palais De Danse which was very popular with young courting couples. The photograph below of Moreton shore in the early 1930's indicates the popularity of the area. The Palais De Danse is in the row of buildings in top left corner of the photograph. 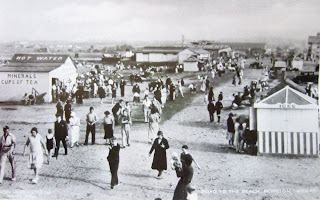 We will never know for sure whether Lowry was referring to the Moreton Palais De Danse or whether he liked the title of the dance hall and used it in Ultramarine or he may have also been familiar with other sources of the name.

The phrase Palais De Danse was a popular name given to many dance halls in England during the early 20th Century conjuring up images of cosmopolitan Europe.

The above photograph is one of the most famous dance halls called Palais De Dansein Berlin before the First World War and maybe the precursor to the others. I have posted below a YouTube video of the Orchester vom "Palais de danse" Kapellmeister with Giorgi Vintilescu recorded in 1912. Vintilescu was "The King of Rags" in Germany. The band recorded the latest rags from America. His Band at the luxury "Palais de danse" consisted of: 2 cornets, 1 trombone, flute, 2 violins, piano, brass bass and drums.

There were Palais De Danse halls in Hammersmith,Edinburgh Leicester, Nottingham as well as in Melbourne and Sydney.

There was also at least 2 films with the title Palais De Danse one made in Germany in 1913 and another in UK in 1928 by Maurice Elvey. Here is a synopsis of the 1928 film:

With a rags to riches story, an intrigue with an older woman, a lounge lizard, and secrets to prevent a scandal, 'Palais de Danse' has all the ingredients to make this late British silent a success. 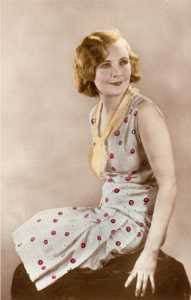 Starring Mabel Poulton (above), a short, impish faced girl who failed to make the transition to sound and was therefore coming to the end of her career in this film, it starts with a Cinderella type plot - Mabel is with her war veteran father watching the bright young things going to party, when she's invited to join them as their token 'poor one'. Of course she falls in love with someone much higher in class than she - Tony King (Robin Irvine), who loves her right back, and even more when she becomes a dance partner at the Palais, under the lecherous gaze of Number One dancer, Juan Jose (a splendidly villainous John Longden).

With Tony's mother, Lady King (Hilda Moore), not entirely receptive to the budding romance, while hiding a secret of her own, the stage is soon set for drama, passion, and a final fight to the death. Along the way there is considerable room for dancing, comedy, and intrigue, and it is all done very well.

With a ballroom sequence not unlike the one at Blackpool in Maurice Elvey's earlier 'Hindle Wakes', and some excellent close-up work, especially of people's eyes, this is an unusual film which repays the attention. A forgotten drama with charm, energy, and some excellent performances.

I have posted the video below from 1926 to give us an idea of how Lowry and Tess may have danced during their evenings out:

You can read more about the dance crazes of the 20's and 30's in Ross McKibbin's book Classes and Cultures. 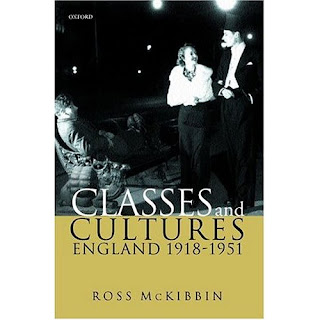 Sussex University also has a collection of mass observation records on dance halls in the 1930s in the UK.

You can also read a book published by the Liverpool Institute of Popular Music entitled Let's Go Dancing: Dance Band Memories of the 1930's Liverpool which paints a vivid picture of dancing to live bands in the Merseyside area including New Brighton.
Posted by Keeping Soul Alive at 02:30