Smoke Gets In Your Eyes


I am currently re-reading Lowry's Dark as the Grave wherein my Friend is Laid and came across Lowry's reference to the above song. Lowry's alter-ego Sigbjorn Wilderness lies in bed in Cuernavaca:

"It was still quite early, early enough, he thought, waking slightly more, for the sounds of the party, the posada, still to be going on next door, or over the barranca, wherever it was: the clarinet soared. "Smoke gets in you eyes," (I'll say it does.)The clarinetist had made quite a good break; it was as significant tune, had, indeed been Ruth's (Lowry's first wife Jan Gabrial)favourite tune..."

Jan Gabrial probably liked the song by Irene Dunne who sang the song in the 1935 film adaptation of the original Broadway play for which the song was written by Jerome Kern. I would think that Lowry would have preferred Tommy Dorsey's version which is nearer in spirit to the version of the song Wilderness hears in Cuernavaca. 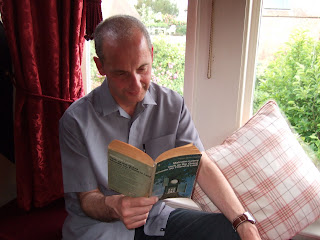 Here I am reading Dark as the Grave wherein my Friend is Laid in Jeake's House, the former home of Lowry's mentor and friend Conrad Aiken in Rye, Sussex. I am currently preparing a post on my recent visit with my wife Barbara to Ripe, Chalvington and Rye in pursuit of Lowry's spirit.
Posted by Keeping Soul Alive at 13:35