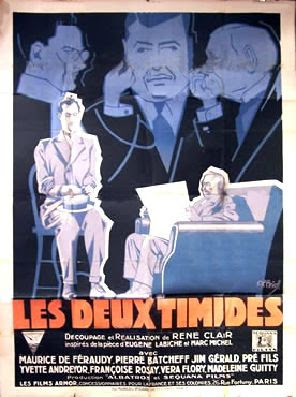 Back at the 19th Hole after a break including a trip to Lowry's burial place in Ripe Sussex. More about my trip later, in the meantime, René Clair's Les Deux Timides 1928is the next in a series of posts on the films shown by the Cambridge Film Guild in the season 1929/30 while Malc was a student at Cambridge.

An Albatross Film produced by Alexander Kamenka at the Gaumont Studios in Billancourt, France. Directed by René Clair and based on a play by Eugene Labiche.
Running time of 62 minutes when released in 1928.

Our story begins with Fremissin (Pierre Batcheff), a timid young lawyer, pleading his first case and attempting to defend his client, burly wife beater Garadoux (Jim Gerald). Garadoux was charged with beating his wife, trashing his dingy apartment when he had returned to his sparse, dingy home after having one too many drinks.

Lawyer Fremission gives the court the version of the incident that he was given by Garadoux in which Garadoux states that he had actually returned home and, kissing his wife, he gave her a bouquet of flowers. He then entertained her with a violin concerto. Fremission repeats the story over and over again and bores all of the spectators in the court including the judges. Then chaos occurs when a mouse runs through the court room. Garadoux is none too pleased with his lawyer's defense and constantly interrupts the proceedings which annoys the judges and amuses the court spectators. Fremission, thoroughly confused by the proceedings, pleads to the court that his client should be given all of the sternness of the court. The judges give Garadoux three months in jail, and he angrily attempts to beat Fremission until he is set upon by the spectators and Fremission's aunt who is one of the spectators.

Two years go by, and Fremission, who is still timid, is courting a timid young lady, Cecile Thibaudier (Vera Flory), who lives in the countryside. Garadoux, now a widower, has made the small town his home, and, having seen Cecile, he arranges to encounter her wealthy father, Mr. Thibaudier (Maurice de Feraudy) outside a commercial building. Garadoux gives Thibaudier the impression that he owns the building. The persistent Garadoux gets himself invited to Thibaudier's home to court Cecile, and, glancing out of a window, he sees Fremission approaching the house, who also is coming to court Cecile.

Garadoux recognizes Fremission as his incompetent lawyer who bungled his case and had him serve three months in jail. Realizing that Fremission is also courting Cecile, he begins a campaign to frighten Fremission. Garadoux, wearing a mask, surprises Fremission on a lonely road in the vicinity where Cecile lives. Fremission receives a letter that his life will be in jeopardy if ventures out of town. A Mack Sennett chase for Cecile's hand begins with the timid lawyer being constantly foiled by the blustery Garadoux. Fremission has to decide if Cecile's hand is worth the danger. Rare And Obscure Films 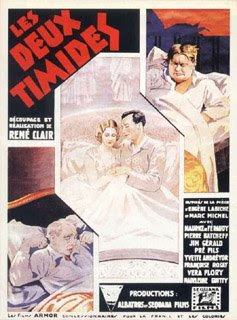 The film was René Clair's last silent movie. You can read a review of a showing of the film at the 2008 Tribeca Festival. 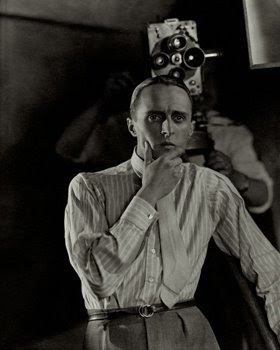 I couldn't find a clip to show of Les Deux Timides so I opted for the clip below from À Nous la Liberté to demonstrate the talent of Clair.