George Dance and the Isle of Man TT Race 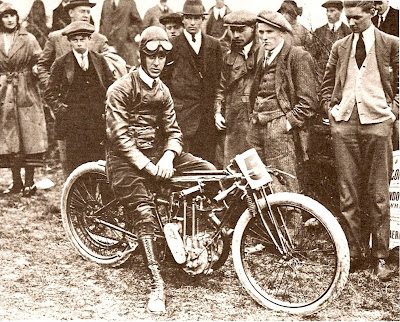 .... upon the countenance of the great George Dance, as in the Isle of Man he negotiated Ballig Bridge, when it seemed he was going to win the Senior Tourist Trophy motorbicycle race upon a Sunbeam with one cylinder Elephant and Colosseum

...having long ago hit upon what was, for him, a satisfactory and common-sense solution, at least of the latter, that would have been appreciated by any Tourist Trophy motorbicycle racer in the Isle of Man, briefly that the nearer you approached the goal, the nearer that goal, viewed from another angle (no matter how many circuits of the island you had to make first), approached you; which was to say that so long as man was crouched headlong on his handlebars towards to death, the nearer death, and the world of ghosts, approached man: in short, to mix his metaphors and cliches, as his mind always did whether he liked it or not, if man was intent on having one foot in the grave, he must take the consequences. Elephant and Colosseum

Lowry's two references to the Isle of Man T.T. Race held annually on the island made me wonder whether he had actually seen the race in which George Dance rode the one cylinder Sunbeam bike. The only problem is that the race was in 1920 and that does not tally with Bowker's contention that the Lowry brothers visited the island in 1919 and Scotland in the 1920 on holiday (Bowker Pursued By Furies 20-22). Bowker probably obtained the information from Russell Lowry. Is it possible that Russell got the dates wrong over the holiday? Or did Malc read about the event? Malc was at Caldicott School during this period where he started writing the handwritten 'Sporting Magazine' with his school friend William Hywel Jones. Therefore it is possible that he may have picked up the information elsewhere such as Motorcycling Magazine? 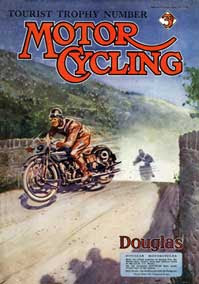 You can view the race on British Pathe news below:

George Dance did not finish the 1920 Senior T.T due to engine trouble after setting the fast lap. The six-lap Senior was contested by just four factory teams (Sunbeam, AJS, Indian and Norton) in the 31-strong entry.

Local man Dougie Brown took over on his Norton, but was overhauled by the eventual winner, Tommy de la Hay, riding another Sunbeam. De la Hay and Brown, who was second, became the first riders to average over 50 mph for a complete race. 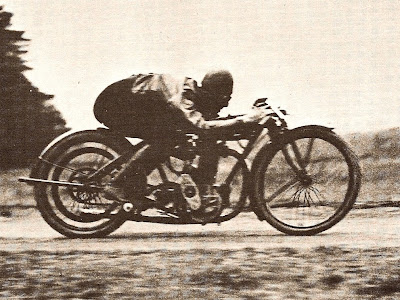 Ballig (Manx: farm of the hollow and also known as Ballig Bridge) is a small hamlet of a few houses situated between the 8th Milestone and 9th Milestone road-side markers on the Snaefell Mountain Course between Ballacraine and Glen Helen. It is the site of a former notorious hump-back bridge used for the Isle of Man TT Races on the primary A3 Castletown to Ramsey and the road junction with the A20 Poortown Road in the parish of German in the Isle of Man.

The area is dominated by the farmland, including the Beary Mountain, St John's village, and Tynwald Mills. A number of changes occurred to the Mountain Course during the 1930s with extensive road widening on the A18 Mountain Road and the removal of the hump-back bridge and road straightening at Ballig for the 1935 racing season and the road work is completed for the Manx Grand Prix in September 1935. The George Formby film No Limit (1936 film) used the 1935 Isle of Man TT races as a backdrop for filming including Ballig Bridge. Wikipedia 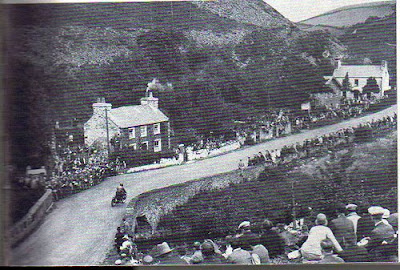 Photo from Bob Holliday's book "Racing Around the Island" - Ballig Bridge 1930. The caption to the photograph states that the bridge was widened, straightened and flattened in 1936. For the record the rider is Ernie Knott on a Rudge on his way to 7th in the 1930 Senior.

The shots of bikes on the British Pathe newsreel appear to have been taken at Ballig Bridge. If so did Malc see this newsreel? Later in 1922, Wilfrid obtained a Sunbeam which was passed onto Russell enabling Malc to experience riding on a motorbike around the roads and lanes of the Wirral. (Bowker 23)
Posted by Keeping Soul Alive at 02:06