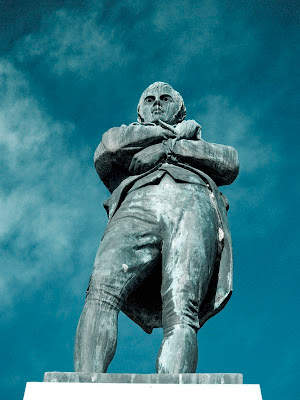 It seemed to him now that it was as though, by some perverse grace, out of total inundation of some Pacific Northwestern city had been preserved....a broken statue of Bobbie Burns.... Present Estate of Pompeii

The statue is located in Stanley Park, Vancouver, British Columbia.

"This statue of Robert Burns, Scotland's National Bard, was unveiled by J. Ramsay MacDonald , a Prime Minister of Britain, on 25th August, 1928. Robert Burns's sincere desire for friendship and brotherhood among all peoples is clearly shown in his many poems and songs. His poetry and letters, both serious and humorous are worthy of study by those who value liberty and freedom.
This memorial was rededicated on the 200th Anniversary of the Bard's death by the Burns Club of Vancouver. 21 July 1996:

Then let us pray that come it may
(as come it will for a' that)...
that man to man, the world o'er
shall birthers be for a' that"

You can read Vancouver's Tribute to Burns here
Posted by Keeping Soul Alive at 04:02