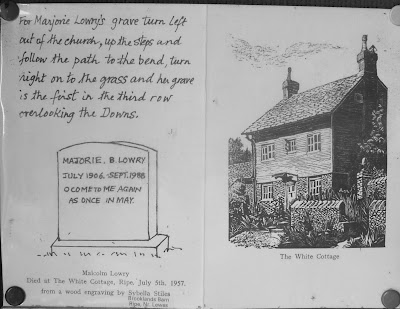 While I was researching material for posts on Marg's film career, I came across a chapter by Anthony Slide on her early films. In the Chapter, he mentions that after her death he visited Ripe where she is buried but after searching the graveyard he was unable to find the grave.

Slide had expected Marg to be lying next to Malc but that is not the case. The St John the Baptist Church now provides a guide to find her grave. Back in 2009, when I visited the graveyard I too had difficulty finding her grave even with the church's guide. As we wandered around, my wife and I were discussing whether Marg had any part in Malc's death based on the Gordon Bowker's Times Literary Supplement article. Eventually, we stopped frustrated in not being able to find the grave. The stone used on the graves in Sussex seems very prone to the weather making reading the inscriptions very difficult. While standing by one gravestone, we continued our chat - I said that I couldn't make my mind up over Marg's guilt over Malc's death. The instance that the words fell from my mouth a shaft of sunlight burst from the overcast sky hitting the gravestone in front of me revealing that it was Marg's. The timing sent cold shivers down our spines!!! 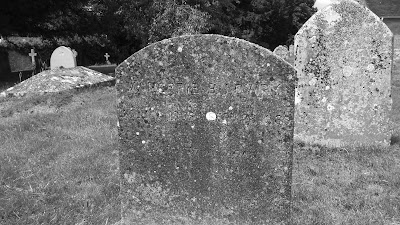 Posted by Keeping Soul Alive at 08:55