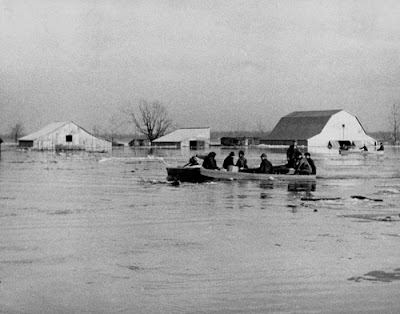 As for propaganda, good propaganda, I take it, is good art. (eg The River.) Letter to Gerald Noxon 21 September 1940

The River is a 1938 short documentary film which shows the importance of the Mississippi River to the United States, and how farming and timber practices had caused topsoil to be swept down the river and into the Gulf of Mexico.

It was written and directed by Pare Lorentz and, like Lorentz's earlier documentary The Plow That Broke the Plains, was also selected for preservation in the United States National Film Registry by the Library of Congress as being "culturally, historically, or aesthetically significant", going into the registry in 1990. Both films have notable scores by Virgil Thomson that are still heard as concert suites. The film was narrated by the American baritone Thomas Hardie Chalmers.

The two films were sponsored by the U.S. government and specifically the Resettlement Administration (RA) to raise awareness about the New Deal. The RA was folded into the Farm Security Administration in 1937, so The River was officially an FSA production.
Read more on Wikipedia

You can watch documentary on Internet Archive:

Posted by Keeping Soul Alive at 09:24