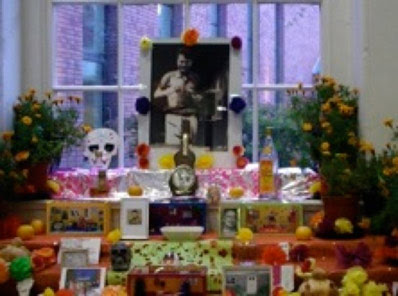 It is funny that nearly 2 years after the Centenary Celebrations for Malc's birth that I keep finding things related to the event:

With the help of the people from Liverpool, we created an altar dedicated to the English writer Malcolm Lowry on the foyer of the Bluecoat Gallery in Liverpool.

The altar included all the traditional, decorations, food and objects used by mexican people to remember their deaths every year during the first and second of Novermber. Food, sugar skulls, special bred, marigold flowers and other crafts were all created in various workshops with different groups of people from Liverpool. We baked bread, made sugar skulls and cooked special food to eat during the first of November. A large picture of Lowry at the center of the altar and a other small pictures were displayed alone with of bottle of Mezcal and other objects associated to Lowry. The program on Sunday also included selected music by the Bluecoat's artistic director Brian Biggs, two requiems by members of the Lantern's choir and workshops and activities for children. Read more
Posted by Keeping Soul Alive at 09:39