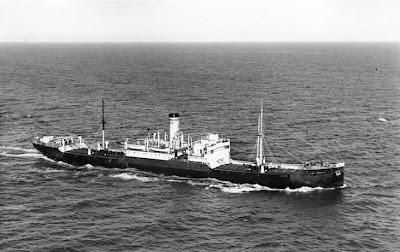 Going down, at 7 am, between buoys, passing at buoy 7, going the other way, S.S. Parthenia out of Glasgow... Through The Panama

There have been several ships with this name. The ship corresponding to the 1947 voyage made by Malc must be the former USS Mercer:

USS Mercer, a 13,130-ton cargo ship, was built to Emergency Fleet Corporation Design 1037 at Hackensack River, New Jersey, in 1918 as the civilian ship of the same name. The Navy acquired her upon completion in January 1919 and immediately placed her in commission. She made one voyage to Europe, with a cargo of food, beginning in mid-February. Upon arrival in England, she was given emergency repairs and then sent to Antwerp, Belgium. After staying at that port into early May, Mercer recrossed the Atlantic and steamed on to New Orleans, Louisiana, where she was decommissioned late in that month. She was returned to the United States Shipping Board in early June 1919.

Mercer remained in that agency's custody until 1941, when she was transferred to British registry and renamed Empire Kangaroo. She operated as Parthenia in 1946-1949, then went to Italian registry, initially as Erminia Mazzella and, from 1951, as Pina Onorato. The ship was scrapped at Spezia, Italy, in 1958. History Navy MIL
Posted by Keeping Soul Alive at 08:14

Email ThisBlogThis!Share to TwitterShare to FacebookShare to Pinterest
Labels: Lowry's Ships, S.S. Parthenia, Through The Panama