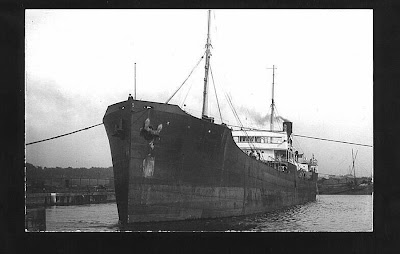 ....a little conjuration of climate you might say, but that the SS Pennsylvania should have gone down with all hands but one Seattle Ishmael.....this and the absolutely unprecedented fury and disaster of this winter, in which more ships have gone down in five minutes than in all my seafaring knowledge.... Letter to Jay Leyda 27 February 1952

S. S. Pennsylvania that sank was a different vessel to the one that Malc and Jan Gabrial sailed on to Mexico in 1936 and which is referred to in Under The Volcano. It seems very surprising that Malc would have made a mistake about such a significant ship as the one he sailed to Mexico on.

The ship that sank in 1952 was an American ship Pennsylvania owned by States Steamship Co. (States Line).The ship was built in 1944 by Kaiser Shipbuilding Co. (Oregon Shipbuilding Corp. Kaiser Cargo Inc. Captain George P. Plover, left Seattle on January 5th, 1952, for Yokohama. On January 9th, the hull cracked in heavy seas 600 miles N.W. of Cape Flattery. The crew of 45 abandoned the ship when she began to leak, but no trace of them was found by ships and aircraft which searched the area. 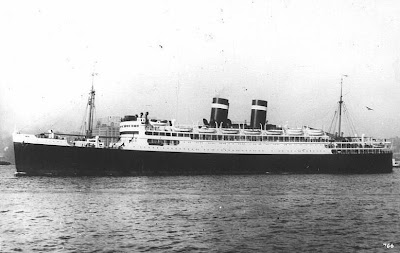 Malc and Jan sailed to Acapulco on the Panama Pacific Line S.S. Pennsylvania later the Argentina (above). One of a trio of American-built passenger liners on the US-South America route, the Argentina was owned and operated by Moore-McCormack Steamship Lines and sailed this route until she was laid up in 1958. Originally built as the "Pennsylvania" for International Mercantile Marine at Newport News Shipyard, VA. She was Hull 329, with Official Number 229044. She was launched 10/10/29 for operation by the Panama Pacific Line, and was built for the New York-Panama-Los Angeles-San Francisco route with her sisters California and Virginia. The Pennsylvania was 613 feet long, 80 feet wide and measured 20,614 gross tons. She carried 750 passengers in first and tourist class; her crew numbered 350. Turbo-electric engines drove her at a service speed of 17 knots. The ships proved too large for this route and their government subsidies were halted in 1937, when they were sold to the U. S. Maritime Commission and laid up. Read more on Wikipedia
Posted by Keeping Soul Alive at 13:57