History of the Isle of Man 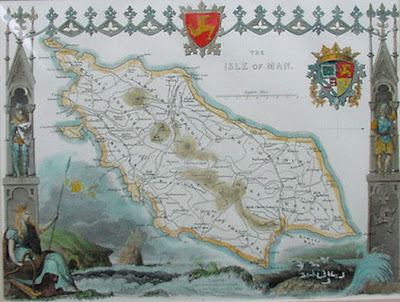 Malc had life long interest in the Isle of Man from the time he spent on family holidays on the isle culminating with the isle featuring in his work. One of the reasons for the appearance of the isle in his work is also partly due to his friendship with the Manxman Jimmy Craige at Dollarton.

..but with his three pipes ready filled for the morning beside him on the table, sitting under the oil lamp with his spectacles on, reading History of the Isle of Man- Present Estate of Pompeii

The history book is by Arthur William Moore(1853-1909) who was a Manx antiquarian, historian, linguist, folklorist, and former Speaker of the House of Keys in the Isle of Man. He published under the sobriquet A. W. Moore. Read more on Wikipedia

You can read the book in two volumes below:

Above map of Isle of Man by Thomas Moule
Posted by Keeping Soul Alive at 06:38

Email ThisBlogThis!Share to TwitterShare to FacebookShare to Pinterest
Labels: Lowry and Isle of Man, Present Estate of Pompeii