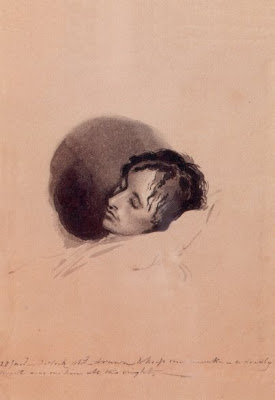 "And yet inerrably it was part of the same poem, the same story. "And yet the fatal prospect hangs. . ." "Severn, lift me up, for I am dying." "Lift them up, keep them away." Strange Comfort Afforded by the Profession 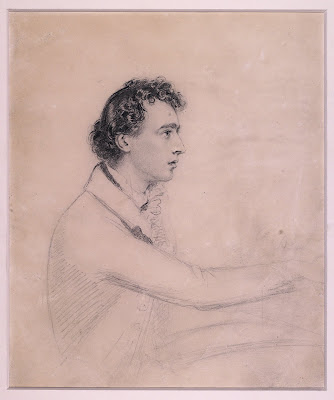 Lowry is actually quoting from a series of letters by Joseph Severn. Joseph Severn (7 December 1793 – 3 August 1879) was an English portrait and subject painter and a personal friend of the famous English poet John Keats. Until recently, it was believed that Severn's life culminated in his association with Keats and that he lived on this fame for the rest of his long life. In reality, Severn launched his own successful artistic career soon after Keats died, becoming a versatile painter in Rome during the 1820s and 1830s. He painted miniatures and altarpieces, landscapes and frescoes, historical and religious scenes, and subjects from the Bible, Greek mythology and Shakespeare. His pictures of Italian peasant life and pastoral genre scenes became very popular with British visitors on the continent and generated multiple commissions for his work. Read more on Wikipedia

On 17 September 1820, a struggling young painter named Joseph Severn sailed from England as companion to John Keats. They arrived in Rome on 15 November. The trip was supposed to cure Keats's lingering illness. The poet suspected it was tuberculosis; his friends and several doctors disagreed. They urged convalescence in a warm climate. Instead, Keats died just three months after his arrival.

Joseph Severn found himself in a most difficult situation. He had left England against his father's wishes; he had no money; worst of all, he had no idea of the severity of Keats's condition. Yet Severn rose to the challenge and became a devoted nurse. His troubles were noted and understood by Keats himself, and Severn was later thanked for his devotion by Percy Shelley in the preface to 'Adonais'.

While in Rome, Severn wrote numerous letters about Keats to their mutual friends in England. These remarkable letters are the definitive account of the poet's final months. English History

The quotes used by Lowry are firstly a letter to John Taylor:

Keats has changed somewhat for the worse, at least his mind has much, very, very much, and this leaves his state much the same, and quite as hopeless. Yet the blood has ceased to come, his digestion is better and but for a cough he must be improving, that is as far as respects his body. But the fatal prospect of Consumption hangs before his "mind's eye" and turns everything to despair and wretchedness. He will not bear the idea of living, much less strive to live. Read more

He is gone--he died with the most perfect ease--he seemed to go to sleep. On the 23rd, about 4, the approaches of death came on. "Severn-I--lift me up--I am dying--I shall die easy--don't be frightened--be firm, and thank God it has come!" I lifted him up in my arms. The phlegm seemed boiling in his throat, and increased until 11, when he gradually sunk into death--so quiet-that I still thought he slept. I cannot say now-I am broken down from four nights' watching, and no sleep since, and my poor Keats gone. Three days since, the body was opened; the lungs were completely gone. The Doctors could not conceive by what means he had lived these two months. I followed his poor body to the grave on Monday, with many English. They take such care of me here--that I must, else, have gone into a fever. I am better now--but still quite disabled.

The Police have been. The furniture, the walls, the floor, every thing must be destroyed by order of the law. But this is well looked to by Dr C.

The letters I put into the coffin with my own hand.

I must leave off. 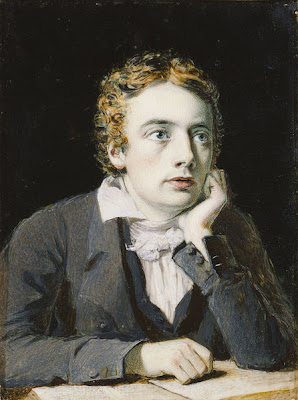