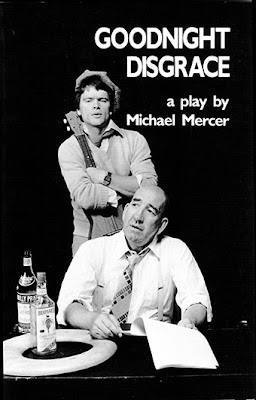 From his wheelchair in a nursing home, the aging Conrad Aiken recalls his long, stormy friendship with Malcolm Lowry. When Aiken is 40, Lowry's father pays him to tutor the young Malcolm. But the protegé becomes Aiken's friend, and, gradually, a real contender. Mercer's powerful play reveals the shifts in the two men's relationship as they struggle with alcoholism, women, creative energy, and each other; and as the student metamorphoses into a rival. "I will be the one they remember," Lowry declares in their final scene together.

Goodnight Disgrace, directed by Leon Pownall, was first performed by the Shakespeare Plus Theatre Company in Nanaimo, British Columbia, on July 5, 1984, with the following cast:

A text of the play has been published by Talon Books,
Posted by Keeping Soul Alive at 13:59