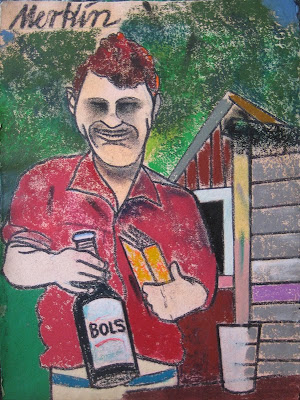 Merkin was born in Brooklyn, New York,in 1938, and held degrees from Syracuse University and the Rhode Island School of Design. In 1962–63 he received a Louis Comfort Tiffany Foundation Fellowship in Painting and, in 1975, The Richard and Hinda Rosenthal Foundation Award from The National Institute of Arts and Letters.
Merkin began teaching at the Rhode Island School of Design (RISD) in 1963 and remained there for nearly 40 years during which time he built his reputation in New York. He is represented in the permanent collections of The Museum of Modern Art, The Smithsonian Institution and the Whitney Museum, among others. Merkin had been a contributing editor for Vanity Fair since 1986 and a regular contributor of illustrations to The New Yorker since 1988, as well as Harper's and The New York Times' Sunday Magazine. From 1988–1991, he wrote a monthly style column for Gentlemen's Quarterly. In 1995, he illustrated the book Leagues Apart: The Men and Times of the Negro Baseball Leagues, by Larry Ritter. He wrote the text and captions for The Tijuana Bibles (Simon & Schuster, 1997). He appeared on the cover of the Beatles’ Sgt. Pepper's Lonely Hearts Club Band album, (back row, right of center). Read more on Wikipedia

See more of his work at Caddie Haddad Gallery
Posted by Keeping Soul Alive at 01:11