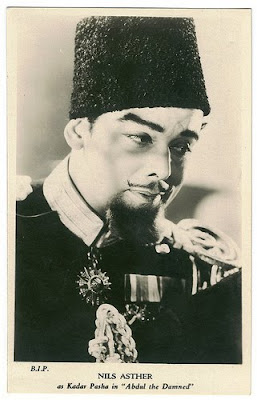 Did you ever hear tell of one Karl Grune .... a few years back made Abdul the Damned in England, with Nils Asther? Letter to Gerald Noxon November 2nd 1940

Abdul the Damned is a 1935 British drama film directed by Karl Grune and starring Fritz Kortner, Nils Asther and John Stuart. It was made by British International Pictures. It set in the Ottoman Empire in the years before the First World War where the Sultan and the Young Turks battle for power. It is also known as Abdul Hamid.

Strong drama of a sinister Sultan tortured by fear of assassination, magnificently acted by Fritz Kortner. Interesting, impressive and, for the most part, gripping entertainment.

Ostensibly, the picture's theme is the overthrow of Sultan Abdul Hamid in an uprising hastened by his own misdeeds. With Fritz Kortner as Abdul, however, it has become substantially a character study - an intense psychologically sound portrait of a man terrorised by the repercussions of his own reign of terror!

With extraordinary subtlety and remarkable economy of expression, Kortner exposes the tortured mentality of a foolish despot whose weakness is revealed only too plainly in the atrocities with which he seeks to maintain his power and safeguard his person. Friendless, surrounded by enemies, respected by none, he brings about his own downfall and is pathetically glad of ignomious exile when it is offered to him at the end.

It would have been better for the picture as a whole if the director had abetted the star in making Abdul Hamid, the man, more important than the events revolving round him. Too much time is given, especially at the beginning, to the obscure and not very exciting plottings of Turkish political parties. And there is an unworthy subsidiary story of a Viennese dancer (Adrienne Ames), who is compelled by the unscrupulous Turkish Police Chief (Nils Asher) to enter the Sultan's harem in return for the life of her lover.

The acting honours are natuarally coniscated by the star - all of them - although Esmé Percy, as the Grand Eunuch, succeeds in turning in a notable supporting performance, and Nils Asher is theatrically effective as the Chief of Police.Film Weekly, September 20th, 1935

For an alternative view of the film - see here 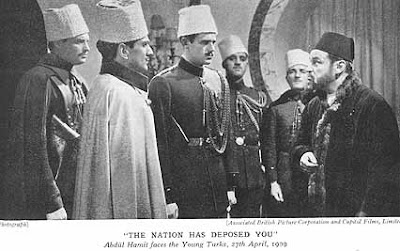 You can obtain the film on DVD as a package with Chu Chin Chow.
Posted by Keeping Soul Alive at 11:39