Margerie Lowry in the movies Part 3 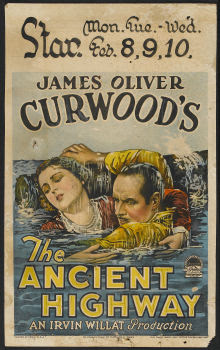 The third post in a series looking at Margerie Lowry in the movies. 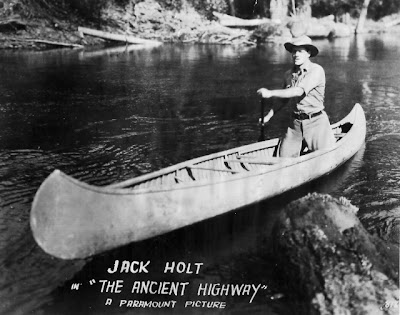 As "The Ancient Highway" pursues its course, one can't help hoping during the initial chapters that the story won't go any nearer to the great open spaces than the rooms in which the hero holds forth in town. But it does, and soon one perceives on the same screen on which Milton Sills was exhibited in "The Knockout" some more logrolling, dynamiting and a series of hectic scenes, in which the hero and the heroine are blown into the turbulent waters among the great tree trunks.

The captions have to make up for the lack of action in a number of places, for there is not much interest in a man and a woman merely gazing into each other's eyes. One subtitle announces that there was no moon that night; but when the scenes are depicted it seems wonderfully clear, and one can't help realizing that the sun, at least, was somewhere in the skies at the time this episode was taken—before it went through the process of blue tinting. Jack Holt officiates as Cliff Brant in this yarn. When he rescues Antoinette St. Ives from a peregrination on that supposedly awful night he can't resist picking up her hand and kissing it ravenously.

Too much ground is covered in this subject, with the consequence that the interest in the story suffers. While Cliff is devoting his herculean energies toward freeing the masses of logs, the opposition camp has the bright idea of dynamiting a hill so that much of it will fall into the stream and thus undo all Cliff's good work.

The Villain informs the heroine that he dares everything because he loves her, and Antoinette thereupon declares that he does not know what love is. She points to Cliff, who, she says, is risking his life for her.

There is the usual misunderstanding between Antoinette and Cliff. In fact it seems as if Antoinette anticipates the conflict. The comedy character flops and falls over anything that happens to be near him, so that it appears as if he were the type of individual who would trip over an ant.

Mr. Holt is sincere in his rôle, even if he does overdo the kissing scenes. He is a clean-cut player and the implausible scenes are not attributable to him, but to the scenarist and the director. Billie Dove is active and attractive as Antoinette. Montagu Love gives a sound performance as the villain.

Those who like logrolling and dynamiting thrills will find this picture leaves nothing to the imagination. NY Times By MORDAUNT HALL. Published: November 11, 1925 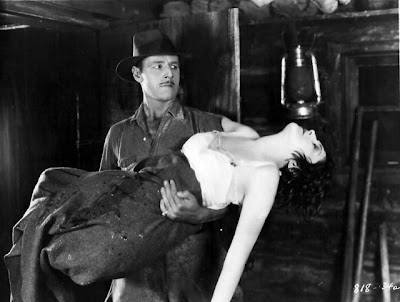 Photos from the Silent Screen Stills Archive
Posted by Keeping Soul Alive at 12:57