In a riverside tavern in Savannah 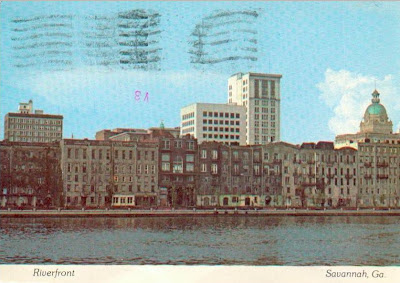 In a riverside tavern in Savannah. From the n.... section next door the juke box is playing Open the door Richard. We are in the 'Whites' drinking your health in claret (by the bottle & bought retail on the spot.) A note on the reverse of a photograph sent
Conrad Aiken 24 June 1947

The Lowrys visited Savannah in February 1947 while on a bus trip from Miami to New York.

"Open the Door, Richard" is a song first recorded on the Black & White Records label by saxophonistist Jack McVea at the suggestion of A&R man Ralph Bass. In 1947, it was the number-one song on Billboard's "Honor Roll of Hits" and became a runaway pop sensation.


"Open the Door, Richard" started out as a black vaudeville routine. Pigmeat Markham, one of several who performed the routine, attributed it to his mentor Bob Russell. The routine was made famous by Dusty Fletcher on stages like the Apollo Theater in New York and in a short film. Dressed in rags, drunk, and with a ladder as his only prop, Fletcher would repeatedly plunk the ladder down stage center, try to climb it to knock on an imaginary door, then crash sprawling on the floor after a few steps while shouting, half-singing "Open the Door, Richard". After this he would mutter a comic monologue, then try the ladder again and repeat the process, while the audience was imagining what Richard was so occupied doing.

Jack McVea was responsible for the musical riff which became associated with the words "Open the Door, Richard" that became familiar to radio listeners and as many as 14 different recordings were made. Read more on Wikipedia

The appeal of the song for Malc goes without saying! Though it is impossible to ascertain which version Malc heard. It could be anyone of these from 1946/47:

The recording by Count Basie was released by RCA Victor Records as catalog number 20-2127. It first reached the Billboard magazine Best Seller chart on February 7, 1947 and lasted four weeks on the chart, peaking at number one.

The recording by Dusty Fletcher was released by National Records as catalog number 4012. It first reached the Billboard Best Seller chart on January 31, 1947, and lasted five weeks on the chart, peaking at number three.

The recording by The Three Flames was released by Columbia Records as catalog number 37268. It first reached the Billboard Best Seller chart on February 14, 1947, and lasted three weeks on the chart, peaking at number four.

The recording by Louis Jordan was released by Decca Records as catalog number 23841. It first reached the Billboard Best Seller chart on March 7, 1947, and lasted two weeks on the chart, peaking at number seven.

The recording by Jack McVea, recorded in October 1946, was released by Black & White Records as catalog number 792. It first reached the Billboard Best Seller chart on February 14, 1947, and lasted two weeks on the chart, peaking at number seven.[6] As stated above, this was the original recording. Wikipedia

Here are the different versions: