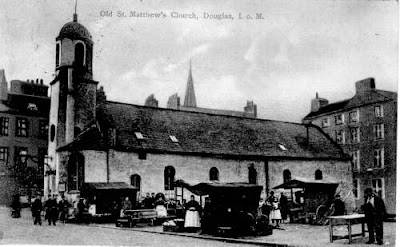 ....beautiful St Matthew’s pulled down and the countryside ruined to make a Liverpool holiday. Elephant and Colosseum

Kennish Drumgold Cosnahan, the Manx writer in Lowry's short story 'Elephant and Colosseum', muses over the destruction of the old Douglas on the Isle of Man. This destruction took place in the early 20th Century before Lowry was born so how did he know of the destruction? He may have heard about it from his Manx friend Jimmy Craige in Dollarton, British Columbia while he was writing the story in the late 40s. Or he may have discovered it a book on the Isle of Man. Lowry does refer to More's History of the Isle of Man in Elephant and Colosseum. However another possible source is:

ABEL HEYWOOD & SON'S ILLUSTRATED GUIDE To The ISLE OF MAN; WITH NOTICES OF ALL THAT IS NOTABLE, CURIOUS, INTERESTING, AMUSING, AND INSTRUCTIVE IN THE MANX KINGDOM. 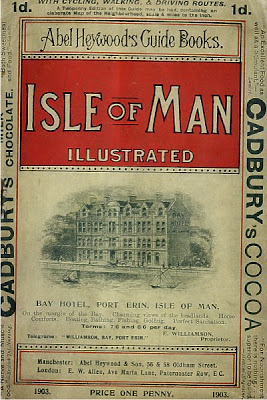 The town of Douglas is the largest and most important in the island. It is the only town in the island which is incorporated, the old Town Commissioners having given place to Town Councillors and Aldermen, presided over by a Mayor. Under the new arrangement Douglas has made rapid progress. The old portion, witlh its insanitary buildings and crowded, narrow streets, has been removed, and broad streets, with healthy, working men's dwellings, have been erected. Old St. Matthew's Church, in the Market Place, has been pulled down, and on its site, also on the site of the old British Hotel and Market Place, a handsome covered market has been erected. Fine Municipal Offices and a Town Hall have also been built at a cost of £20,000. A new system of drainage is now being carried out at a great cost. The Waterworks have been purchased and a new Reservoir made, and active preparations are going forward to make another, thus assuring the town an abundant supply of fresh water. An infectious diseases hospital has also been erected, but in consequence of the immunity of the town from infectious diseases it is seldom that there are any patients. Everything has been done to make the town a true place of health and rest for the thousands annually visiting it.
Posted by Keeping Soul Alive at 09:45

Email ThisBlogThis!Share to TwitterShare to FacebookShare to Pinterest
Labels: Elephant and Colosseum, Lowry and Isle of Man